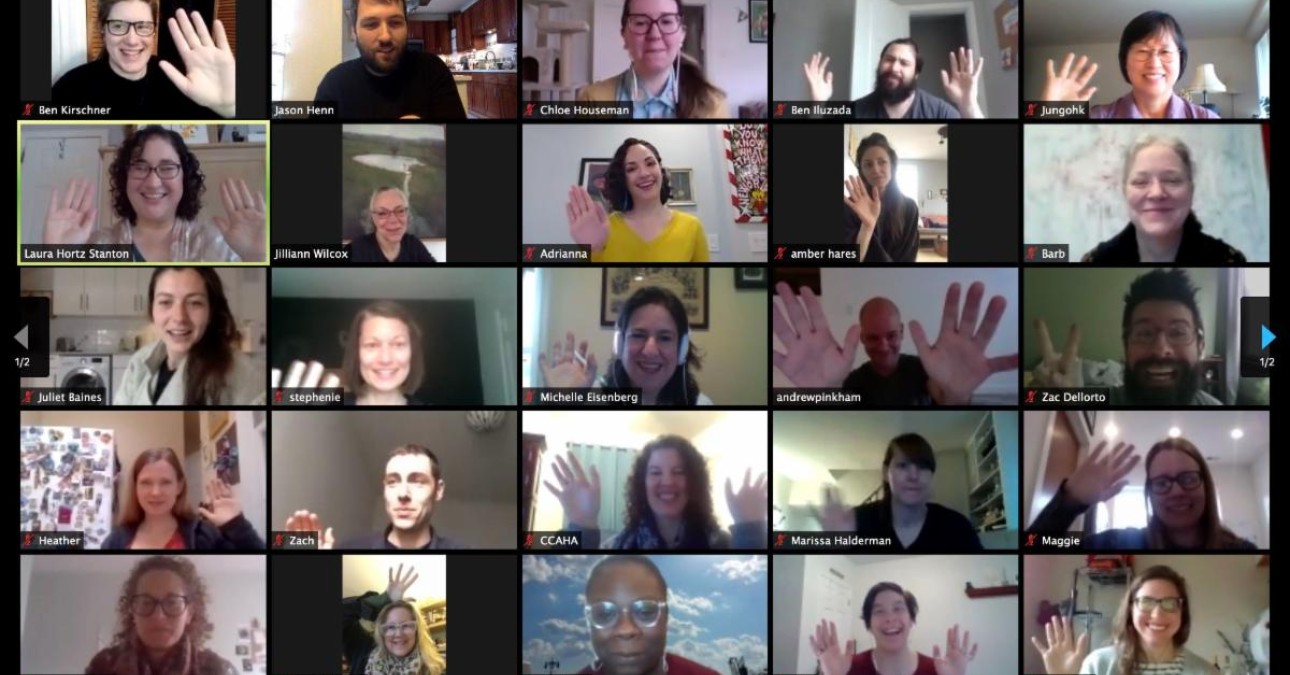 Two years since COVID-19 triggered a national lockdown and evacuation of the workplace, the staff of CCAHA looks back on successful strategies that helped us adapt and continue preservation and conservation work for our clients. (Above: CCAHA staff members wave to the camera during our first-ever all-staff Zoom meeting, March 2020)

See you in two weeks.

That’s what CCAHA Executive Director Laura Hortz Stanton thought in March 2020, when the initial COVID-19 surge triggered a national lockdown and evacuation of the workplace. At the time, she was far from alone.

Though Philadelphia has begun easing restrictions this month, we are all still grappling with the virus two years later. Challenges to our lifestyles, relationships, and job performance have forced us to alter how we live and work, creating a new, often dynamic, normal.

The painstaking process of treating historic artifacts, art, precious photos, and documents requires an element of trust between owners and the caretakers tasked to handle them at CCAHA that is hard to duplicate without direct human interaction.

“It was definitely strange at first. We have a very tight-knit team and to say, ‘You have to go home now and I'll see you in two weeks,’ was strange. And then when it went on much longer, we were just trying to figure it out on a day-by-day basis. As someone in a leadership position, not having the answers at that point was a little—no, a lot—unnerving.

“The amazing thing about our staff, though, was that everybody was upset not to be at work. People were jumping in—‘How can I help? What can I do? What should I be doing?’

“It was impressive to me how quickly we were able to adapt, because the team came together to try and find solutions.”

Collaboration is a major part of the culture at CCAHA. Each staff member brings an expertise, but the real strength of CCAHA is its interdependence. Before COVID-19, tapping each other’s expertise when projects crossed departments was as easy as a stroll down the hallway. Dispersed to our homes, that interdependence became more challenging. As with other industries, there was a learning curve about how to use online tools most effectively, and the need for additional effort as well to make it worthwhile.

At first, during the initial lockdown, it was challenging. For lab staff, bringing treatment work home was impossible, so staff members pivoted. Some focused on creating online educational presentations. Others created and edited technical leaflets and website resources aimed at those at home trying to figure out what to do. And in an effort to simulate the lost workplace camaraderie, groups like the Sunshine Committee—in which employees posted pictures of their lives—were formed on Microsoft Teams channels. Another group experimented with recipes, such as making sourdough bread.

By summer 2020, COVID’s grip loosened enough to allow for staggered office days. Two teams alternated days in the office. Still, any work that could be done at home was.

And there was plenty of work. Those employed by museums, libraries, and historic landmarks were also isolated and found themselves with time to address delayed conservation projects. Some sent a steady stream of artifacts CCAHA’s way. With our reputation as a leader in preservation, CCAHA expanded educational products and programs, even shipping supplies used in YouTube and Zoom tutorials to facilitate smaller do-it-yourself projects that could be done at home. We also started virtual consultations and assessments. Zoom allowed clients to walk CCAHA specialists through collections to determine methodology, timelines and priorities. Virtual assessments and education programs also saved clients travel costs.

“I think we were some of the first to do virtual assessments and to create a methodology around that, which we have since shared out at conferences,” Laura notes.

For conservation work, the exchange of materials took place not in a conference room but in the parking lot, with everyone masked. A colloquium held by CCAHA in March 2021 on diversity in collections care and management attracted 250 people from all over the country. “It enabled us to have really in-depth important conversations in a way we never would have been able to do in person,” Laura said. “Important conferences that we used to do in person, those things can happen—and I think people expect them to happen—online now.”

During the pandemic, CCAHA also started getting more calls from private individuals who were at home cleaning out their closets, going through their own personal papers and their photos—"Even finding grandma's recipe box or a family Bible that was important to reclaim,” she said, “and it has been wonderful working with these people to preserve and make accessible what is important to them and the community.”

For more insight on how the pandemic has affected staff, we checked-in with three members of the CCAHA team and asked them to share their experiences since COVID-19 hit in March 2020.

Maggie Downing, who manages the digital imaging department, joined CCAHA staff in 2018 after working with the Museum of Photographic Arts in San Diego, and the American Academy of Arts and Letters, and the Granger Collection historical image library, both in New York. Recognized by the Society of American Archivists as a Digital Archives Specialist, she also serves on the American Institute for Conservation’s Imaging Working Group.

Maggie oversees a team of technicians whose range of imaging projects includes digitization, printing, and image enhancement, as well as the before-treatment and after-treatment photography for items in which conservation work was done.

“Everything was paused for a long time as people didn't know where funding was going to come from for their various projects,” she said. “These kinds of projects are usually not emergency projects and can be satisfied for a period of time, so work slowed down as budgets were frozen. Once people realized they were going to be OK, then we were kind of bombarded with all the backlog. There were some tough deadlines because everybody needed to get stuff ready for when they open for exhibits.’’

That began at the start of last summer, she said, and has continued. Before that, and particularly in those early pandemic months when she was housebound, Downing and her team worked to increase CCAHA’s webinar content, developing a six-part series called “Digitization 101’’ aimed at an audience of libraries, museums, and archives that wanted to start their own large-scale scanning program. Topic-centric, each was 20-30 minutes in length.

She is working on a second series now.

“We had done some webinars and things like that before but never to the scale that we're doing now,” she said. “It just creates a different level of accessibility for people in what we're doing. It was a great learning opportunity.”

The webinars led to an increase in her consultation work, and new clients, she said. The webinars now reside on CCAHA’s YouTube page and are accessible to anyone who is interested.

The two main functions of Preservation Services are consulting on planning and assessments, and education programs. Both needed to change immensely, Dyani said, and the department was able to pivot both services to virtual quickly.

The planning and assessment work was spearheaded by CCAHA’s team overseeing the Documentary Heritage and Preservation Services for New York (DHPSNY) program. They quickly came up with a solid process and method, with the rest of the team learning from that process.

Education programs transitioned to webinars, or in the case of conferences, to online symposiums, for topics including collections care and fundraising. One clever idea was to mail supply kits to participants in a program on object enclosures. Receiving the materials in advance enabled participants to learn something concrete, and participants have really enjoyed that hybrid approach, Dyani said. “There are ways where we can still really energize an audience and provide a hands-on experience even if we’re not in the same room.”

Senior Paper Conservator Heather Hendry worked in that role at the Canadian Conservation Institute in Ottawa, Ontario; the Yale Center for British Art in New Haven, Conn.; Harvard Library’s Weissman Preservation Center in Cambridge, Mass.; and was in business for herself for five years before joining CCAHA in 2015.

The pandemic left Heather with two contrasting impressions. One was that there was no replacement for the in-person physical act of examining important papers to assess degradation, ink, and how to proceed. The other was that process doesn’t always need to be part of the initial assessment.

“We definitely learned we could do more virtually than we used to think we could,” she said. “And it's been very helpful in terms of talking to clients, especially people who maybe haven't visited a conservator before. They've never gone through this process. If they can show us their artwork, we can give them some feedback with pictures or a video call. So they have a better idea of whether they want to go through with bringing the object in, and just what's entailed.”

That alleviated some challenges during the early part of the pandemic, when she was pinned at home. But there is no replacement for touching, feeling, seeing, and carefully transporting delicate documents in the CCAHA lab. Like the other departments of CCAHA, Heather and her staff gained limited access to CCAHA’s facility by mid-July of 2020, alternating between work and home.

“I actually think we're busier now than we were back then because a number of projects were put off as every institution we work for had a lot of funding uncertainty,” she said. “So at this point I think everything is suddenly coming together and moving forward. We’re very, very busy. And it's wonderful.”

And the takeaway from it all?

“I would say that it gave us a greater chance for connection and professional development with other professionals around the world and not only have we been able to spend the time learning from other people, I've personally been able to develop more teaching on some of my areas of research and expertise as well. So I feel like there's been growth both giving and receiving in terms of that, and I think we've also learned some ways that we can serve our clients better by being a little bit more flexible and having more options to give them. And I think everyone has changed a little bit and people are actually much more appreciative of having that human connection and having someone to explain things to them.”