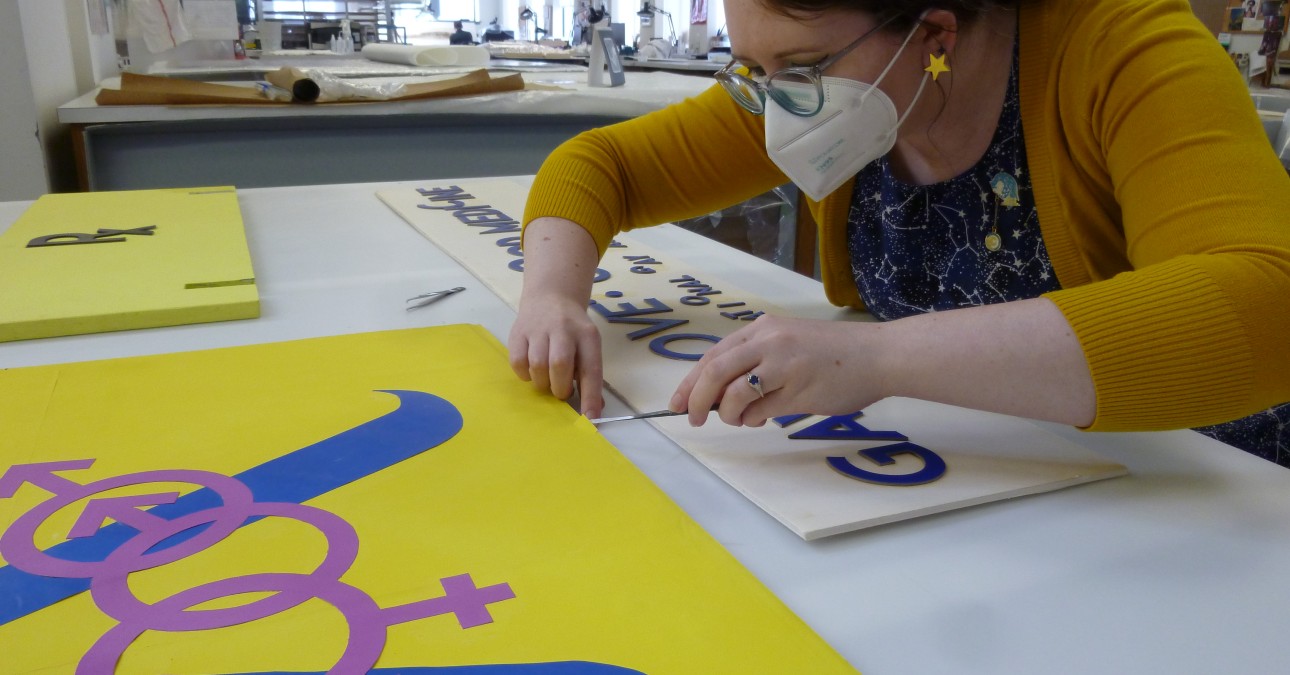 Conference display boards and signs that are part of the collection of the John J. Wilcox, Jr. Archives at William Way LGBT Community Center in Philadelphia are receiving treatment at the Conservation Center for Art & Historic Artifacts to preserve an important part of American LGBTQ history and culture.

In the 1970s, Barbara Gittings (1932-2007), a pioneer in the LGBT rights movement, created a series of exhibition booths for conferences of the American Psychiatric Association (APA) and American Library Association (ALA). According to John Anderies, director of the Wilcox Archives, the purpose of the displays was to advocate for change, as well as change hearts and minds about what it meant to be gay or lesbian. Now, he shared, they stand as a tribute to Gittings’ phenomenally successful work in shaping the American social landscape. 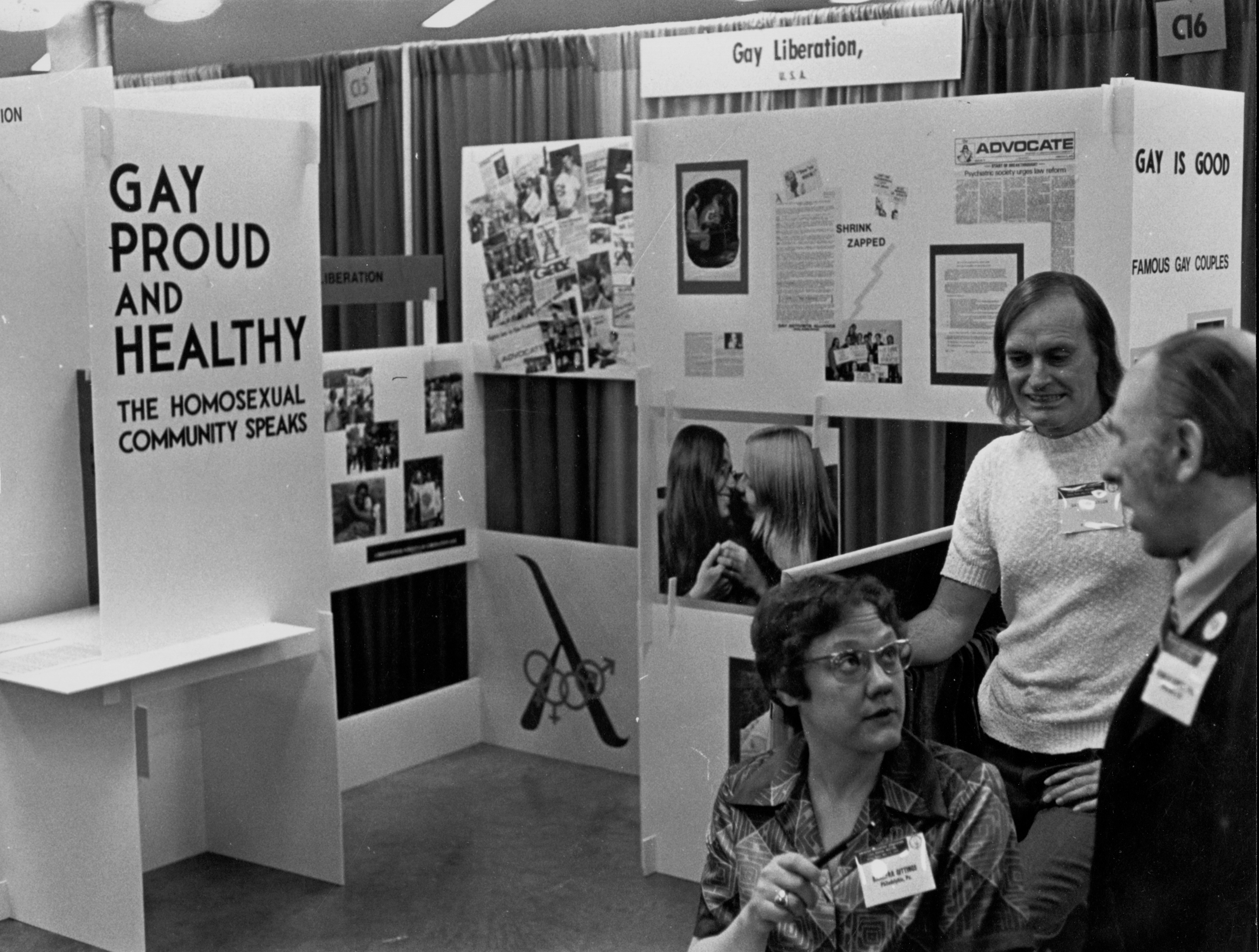 The most important of them, Anderies wrote in a story announcing the grant, was the 1972 exhibition booth Gittings and her partner, Kay Tobin Lahusen, designed for the APA conference. It worked in tandem with a panel co-hosted by Gittings, famously featuring the masked “Dr. H. Anonymous,” who described the frustrations of his life as a closeted gay psychiatrist. Challenged by this activism, the APA officially removed the classification of homosexuality as a “mental disorder” in the Diagnostic and Statistical  Manual (DSM), the standard reference used by mental health professionals, Anderies wrote. 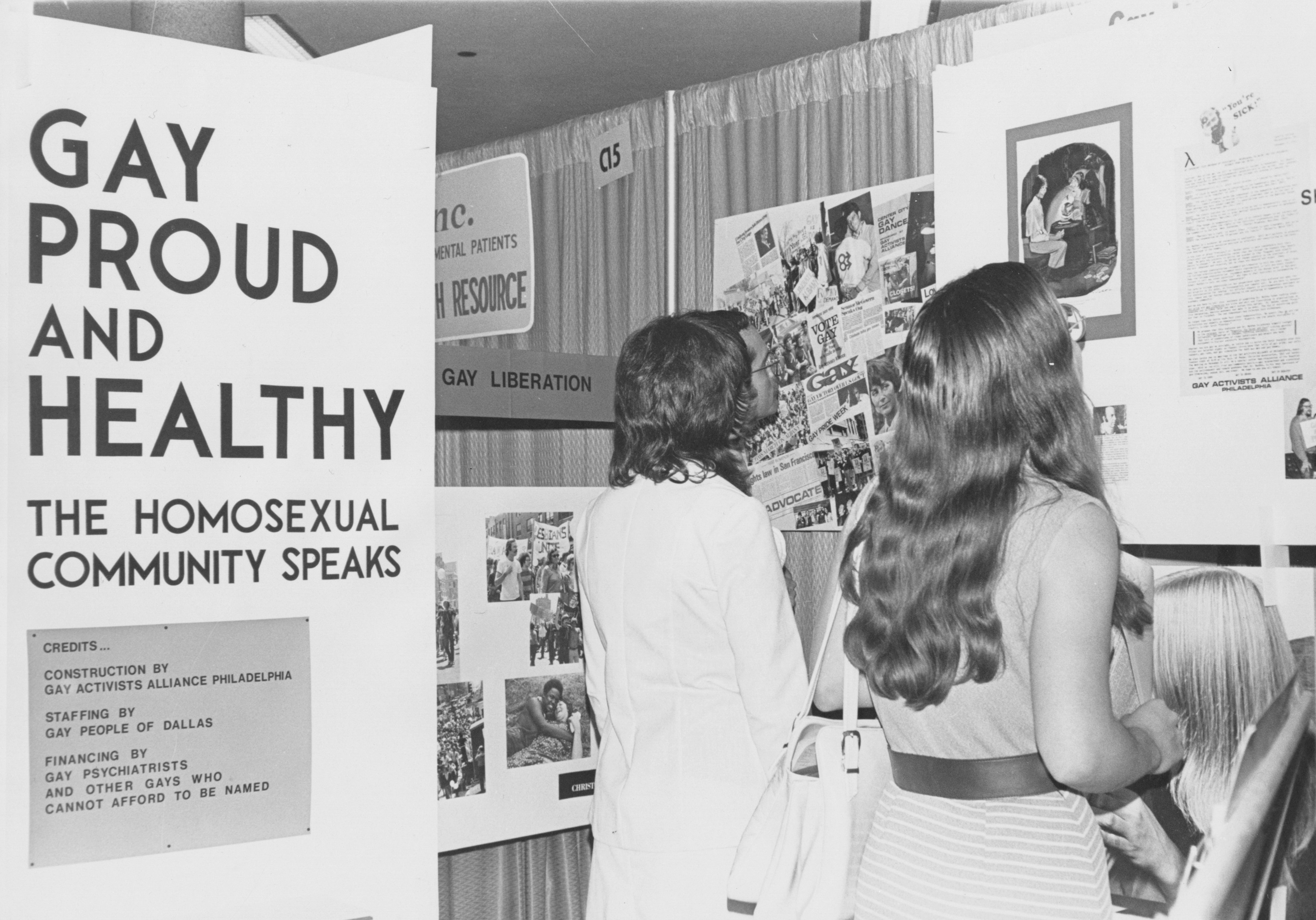 “It occurred to me that this national story and stature would connect well to a Save America’s Treasures grant,” Anderies said, so he ran the idea by Lee Price, CCAHA’s Director of Development. With links shared by Anderies, Price wrote the grant narrative. “I think he just did a masterful job. It was so wonderful to work with him,” Anderies said. Chloe Houseman, a Paper Conservator at CCAHA, also contributed by providing the assessment. “It was a lovely process putting that together, and then we were just tickled when we found out that we received it,” Anderies said.

The two-year, $29,520 grant, is supporting work to conserve, digitize, and create housing for the collection. “Things that certainly we consider to be national treasures, but even things that we consider to be community treasures, are really deserving of being preserved, to tell a community story into the future, so that is extraordinarily important,” Anderies said. 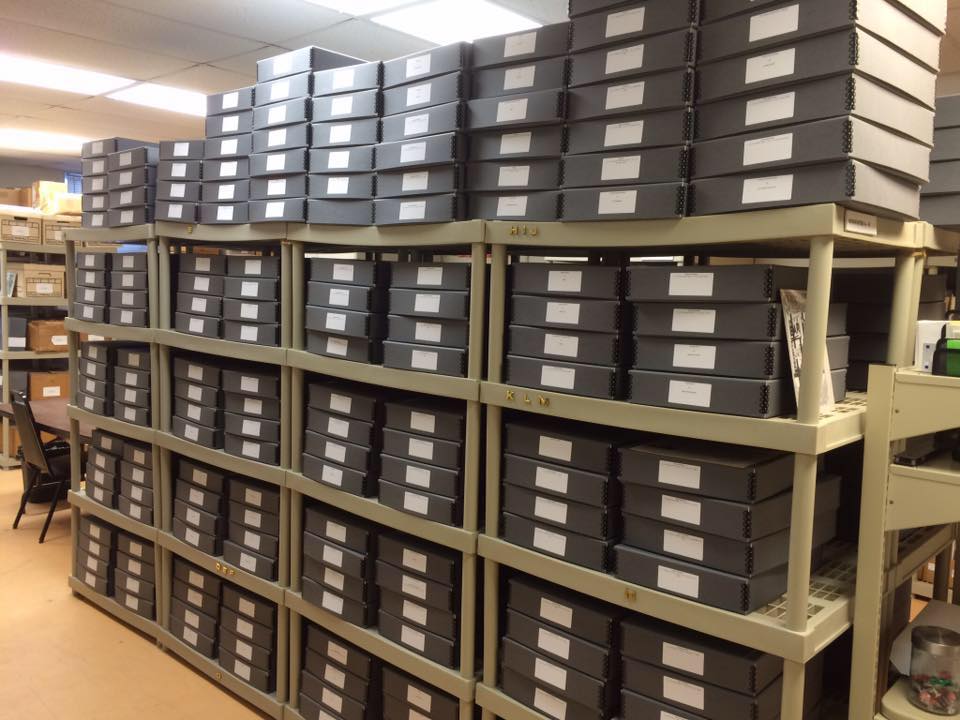 Materials in the Wilcox Archives amount to about 1500 linear feet. “So, it’s a substantial small collection,” Anderies said. The collection was moved offsite during building renovations, and researchers have been assisted virtually. The building reopens late summer. “We are so looking forward to having people in-person again,” he said. “I cannot tell you how much we’re looking forward to that.”

The Wilcox Archives is incredibly active, utilized by students, journalists, activists, artists, and community members. The year prior to the pandemic shutdown, the Wilcox Archives handled 267 research appointments.

“It wasn’t that long ago that I think an LGBTQ project would not have been taken very seriously, and so much has changed – and we know there is still need for change – that I think it’s so important to be part of the people and collections that are put forward to receive this kind of treatment and care,” Anderies added. “I think it’s just an important statement for us to be saying these things matter. It’s really heartwarming to know that institutions like the National Park Service and IMLS and NEH, that they are onboard with that too. It means a lot.”

The importance of the Wilcox Archives conservation project resonates strongly with Houseman, too. “In our line of work, it’s often an important history (we are preserving), but I feel particularly strongly about LGBTQ+/Queer history because for so long it has been not just not preserved, but actively erased or destroyed by people who do not agree with people’s right to be who they are,” Houseman said. “So, I am extremely passionate about helping preserve this part of Queer history. One of the excellent Queer activists, Queer elders, really spearheaded a lot of these changes that would not have been possible if someone hadn’t sat down and said, I’m going to do it, I’m going to make a change.” 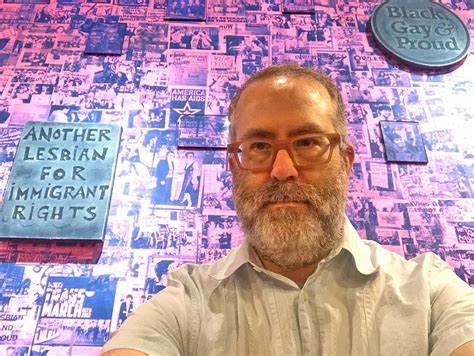 John Anderies has a long history with CCAHA, previously working together when he was at Haverford College in Special Collections. He was hired by the William Way LGBT Community Center through a William Penn Foundation grant the Center received, with CCAHA being a primary partner in the grant. He and Curator Bob Skiba were the archives’ first paid staff members.

Much of the project is about stabilization, Houseman said. When they were created, the objects were not meant to last forever, she observed. “They were meant to be structurally sound. They were meant to look good at conferences for a little while. And I don’t think at the time Barbara Gittings and Kay Lahusen, who were making them, were thinking, ‘Are these going to last a hundred years? We should think about that.’ And we’re not at that point in their history yet, but I’m glad we’re able to intervene before we’re at that point.” 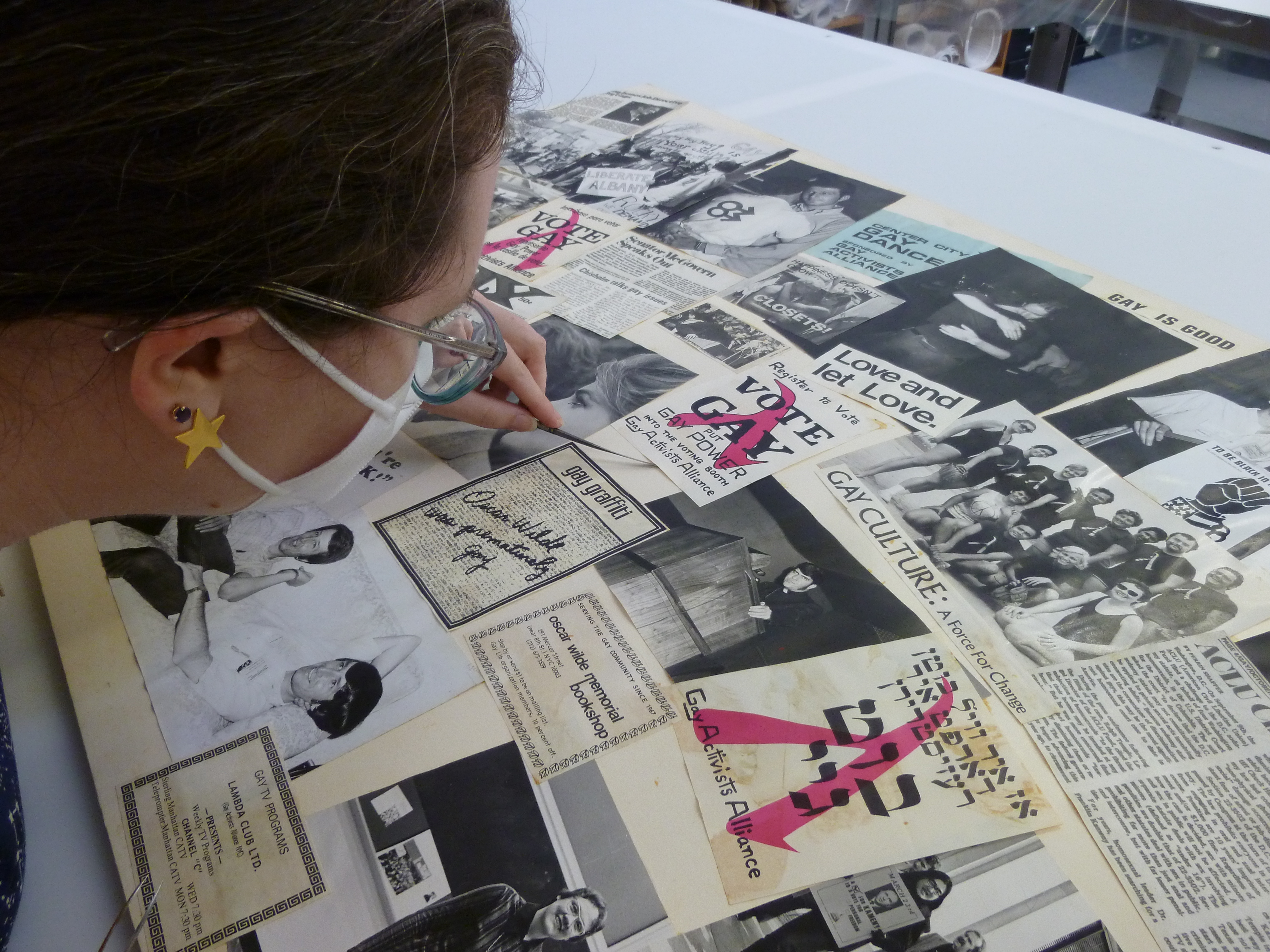 The materials are foam core, and construction paper and stick-on letters. They were traveling around to the shows. “A lot of what we’re doing is reattaching letters on these signs that have come off, fixing tears, fixing structural damages and breaks, reducing general surface dirt, dust, grime that just accumulates over time,” Houseman said.

“These are not only fragile because of the materials, but they’re also oversized, which adds another dimension of careful handling, and also just more time to really treat them, because anytime something’s bigger, it just takes more time to do,” Houseman said. “My hope is that after treatment they will be stable and able to be stored and exhibited safely by William Way.”

“Being in a stable environment at William Way, not traveling, being stored flat, having some level of treatment to stabilize them, is going to allow them to be useable and extant for a while,” Houseman said. “And also because they’re being imaged at this point, even if they do continue to degrade and there are other changes and or unfixable problems, we have a digital record of how they looked at this point in time.” 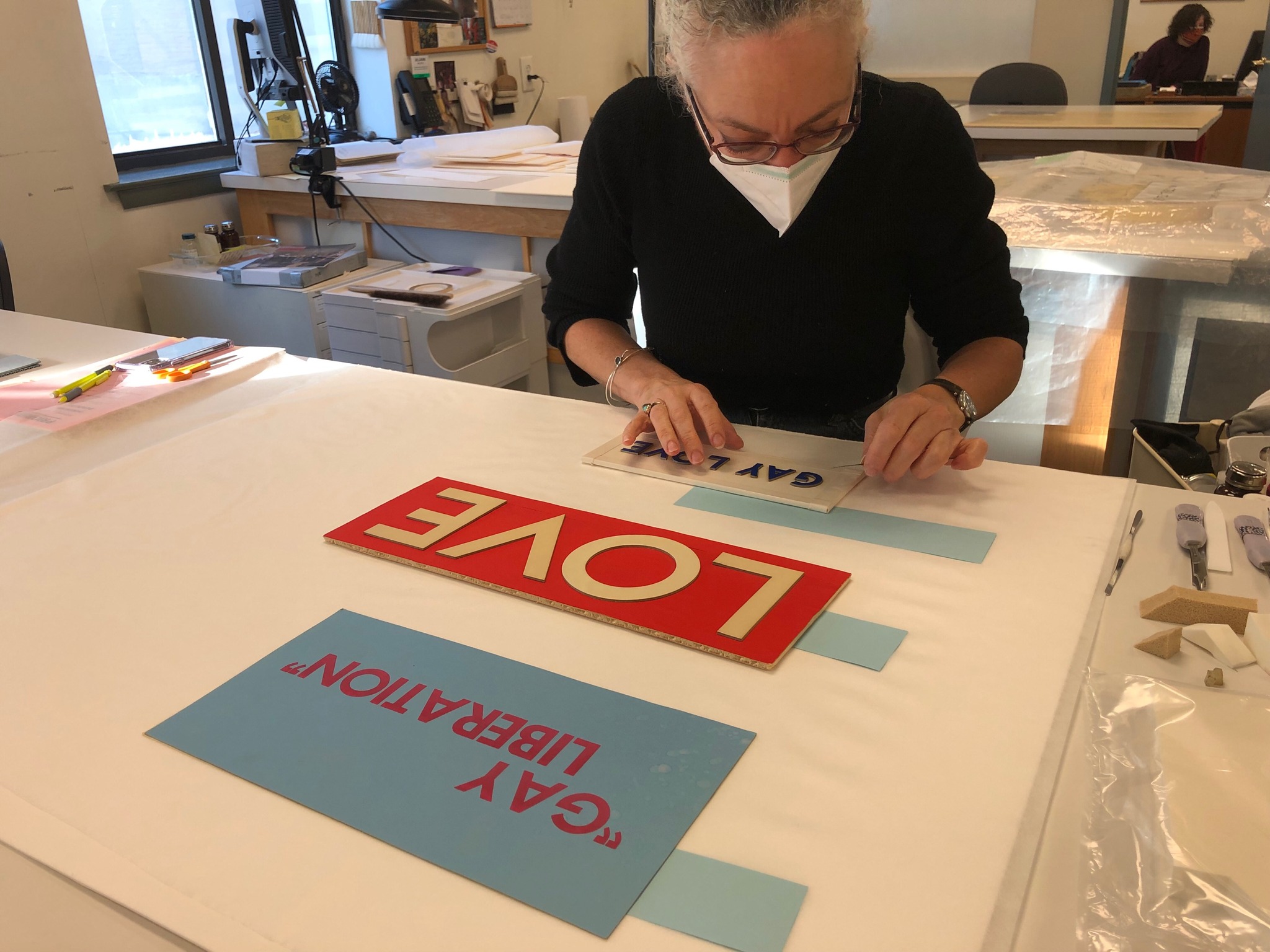 “We’ll be really thrilled to be able to get those images online and described and let more people know about these and see them up-close-and-personal online,” Anderies said. “We’re always happy to have people see the original objects,” he said. “That‘s just always such a wonderful thing. But cutting down on the handling that doesn’t need to happen is great, too. We’re really thrilled that they’ll be digitized and available online.”

The Center had its own records to maintain, and also library donations coming in that weren’t quite books that had to be managed, and it grew enough to become an archives, Anderies said. “One of the things that we had written into the grant – which I have come to believe that every grant should have this, every institutions should have this – is that we wrote in one day a week for three years that we would have a CCAHA conservation tech onsite. Incredible! Just a game changer to have someone to work alongside thinking about conservation issues, collections care issues, to do work, to be able to take things back to the office and do some work, do some things that probably under other circumstances we would not have been able to afford. It was just so wonderful.”

Call for Proposals: Our Planet, Our Collections