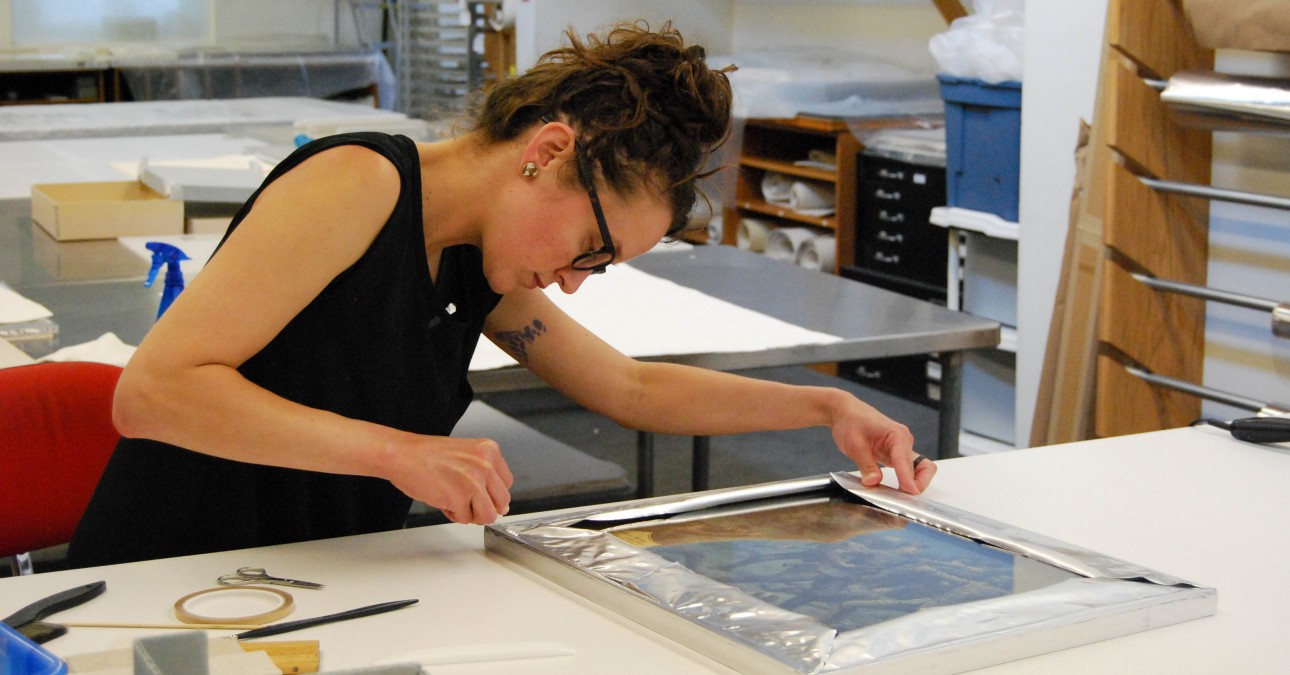 In World War I, American soldiers served in segregated regiments. Like many troops of color, the men serving in the 369th Infantry Regiment, commonly called the “Harlem Hellfighters,” were sent to France to serve under the French Army. It was there, on the Western Front, that two American privates made history. Early in the morning of May 15, 1918, William Henry Johnson and Needham Roberts were on guard duty when they were attacked by a German raiding party. Accounts differ, but it appears that there were between 12 and 20 German troops. Nevertheless, Johnson and Roberts defended their post, each sustaining multiple injuries. When the troops began to drag an injured Roberts away, Johnson, whose gun had jammed, fought the soldiers off using the butt of his rifle and a knife. Thanks to the efforts of both soldiers, the German troops fled.

Johnson and Roberts were among the first Americans to receive the French Army’s Croix de Guerre, the nation’s highest award for bravery. Both men were also given posthumous Purple Hearts for their service. And in 2015, President Obama awarded Johnson a posthumous Medal of Honor.

In 1918, the men’s heroics were the subject of a chromolithograph poster print. CCAHA recently treated one of these prints for the American Battle Monuments Commission to prepare it for display at the Commission’s Visitor Center at the MeuseArgonne American Cemetery in France. When the poster came to CCAHA, it had minor surface dirt overall. The paper support had striated dark brown stains. There were small tears and folds around the perimeter, as well as adhesive residues from masking tape.

CCAHA National Endowment for the Arts Fellow Remy Dreyfuss-Deseigne surfaced cleaned the paper support with a soft brush and vulcanized rubber sponges. Using a scalpel, he removed as much adhesive residue as possible. He then washed the poster with calcium-enriched deionized water to reduce discoloration and acidity. After drying the poster between felts under moderate weight, Dreyfuss-Deseigne mended tears and creases with strips of mulberry paper and wheat starch paste. Finally, he inpainted the piece with watercolors. 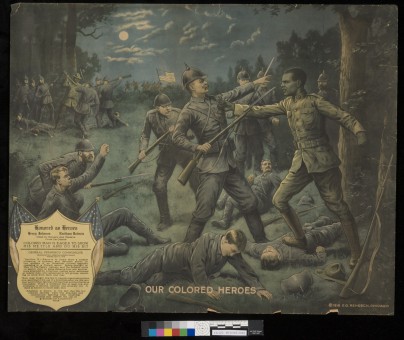 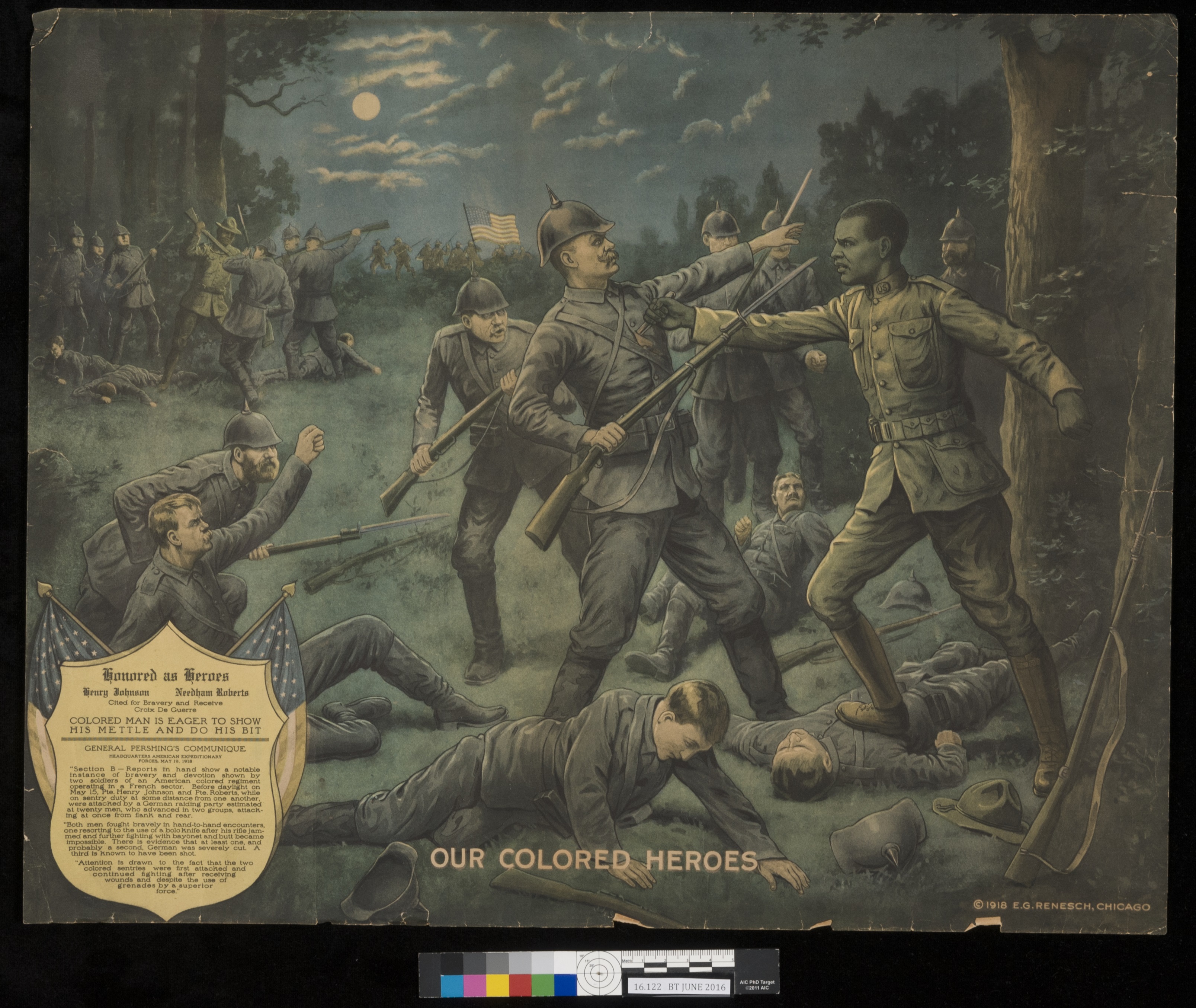 The image after treatment.

The crest on the image reads:

"Reports in hand show a notable instance of bravery and devotion shown by two soldiers of an American colored regiment operating in a French sector. Before daylight on May 15, Pte. Henry Johnson and Pte. Roberts, while on sentry duty at some distance from one another, were attacked by a German raiding party estimated at twenty men, who advanced in two groups, attacking at once from flank and rear.

Both men fought bravely in hand-to-hand encounters, one resorting to the use of a bolo knife after his rifle jammed and further fighting with bayonet and butt became impossible. There is evidence that at least one, and probably a second, German was severly cut. A third is known to have been shot.

Attention is drawn to the fact that the two colored sentries were first attacked and continued fighting after receiving wounds and despite the use of grenades by a superior force." 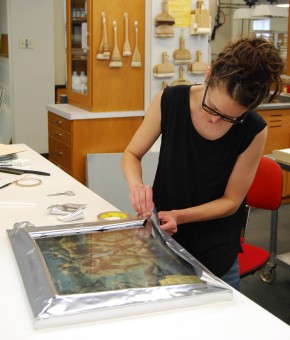 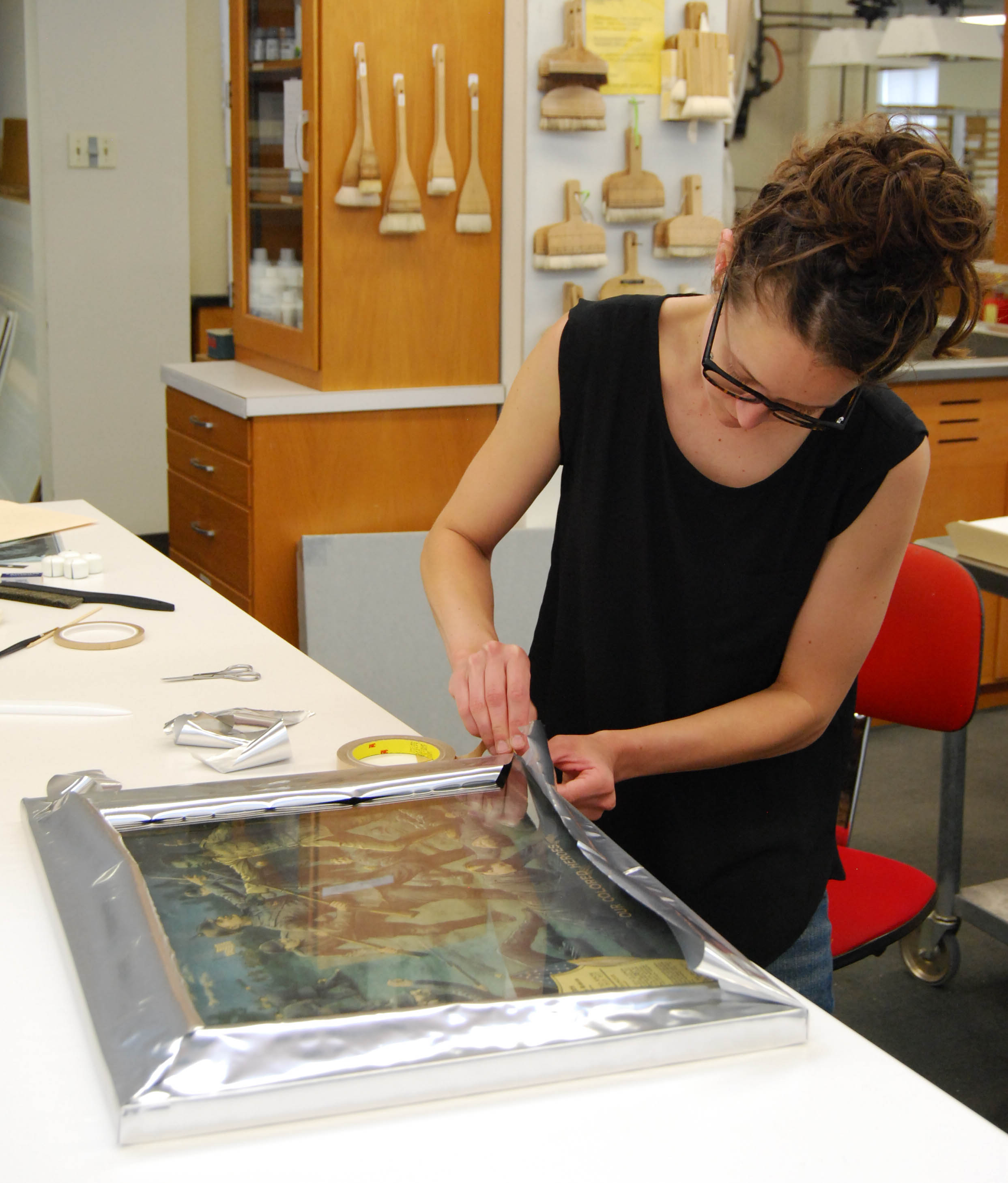