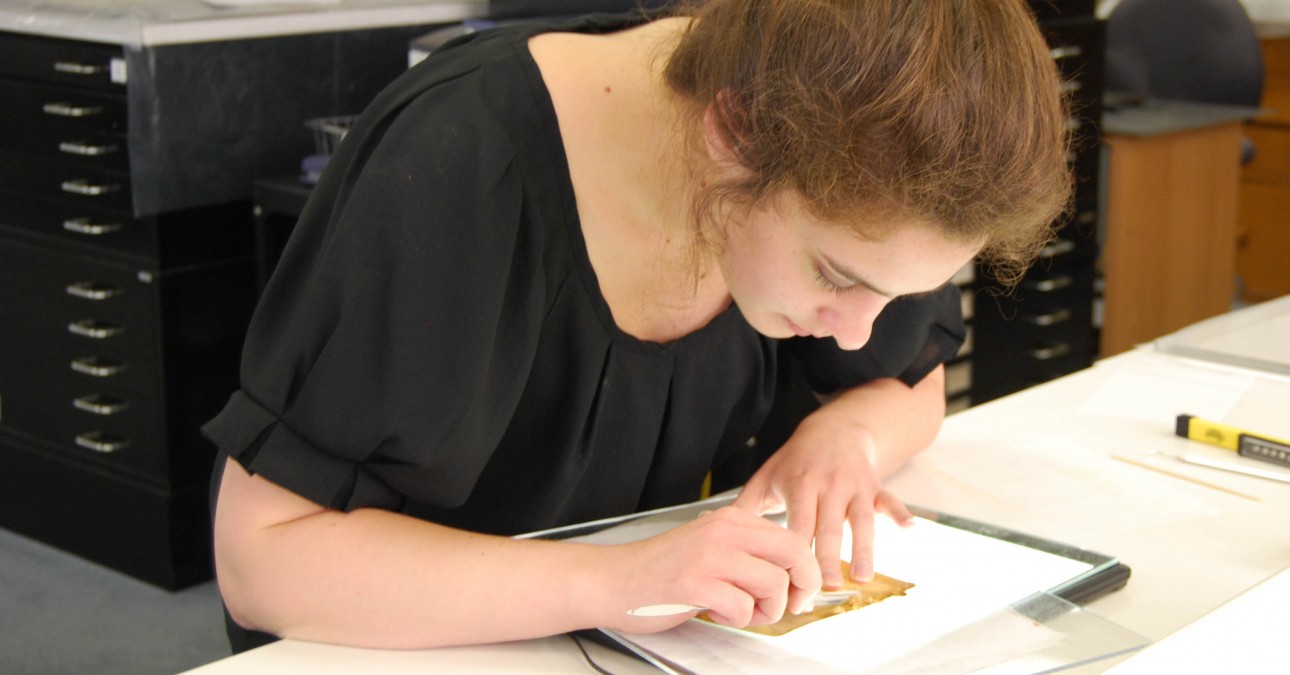 The Fellowship Year at CCAHA

As this issue of Art-i-facts goes to press, CCAHA Fellow Rémy Dreyfuss-Deseigne has just returned to Paris to present the findings of his research project on nanocellulose at an international conference for museum conservators. He is working in a long tradition of utilizing CCAHA’s state-of-the-art conservation laboratory to contribute to conservator education and cutting-edge research in the field.

According to CCAHA records, Dreyfuss-Deseigne is the 62nd conservator-in-training to gain hands-on experience in the laboratory since CCAHA’s founding in 1977. As the profession has changed, these positions have variously been called apprenticeships, internships, and now fellowships. They provide extensive training for the new conservator, as he or she enters into the field after graduating from one of the world’s top training programs. Fresh from his Masters-level training at the French National Institute for Cultural Heritage, DreyfussDeseigne began his one-year National Endowment for the Arts (NEA) Fellowship at CCAHA in September 2015.

As a key part of their year in the laboratory, CCAHA Fellows are encouraged to dedicate some time to an in-depth research project, taking advantage of the professional staff and resources available at CCAHA. Generous funding from places like NEA, the Andrew W. Mellon Foundation, and the Samuel Kress Foundation allows the Fellows to attend conferences, consult with leading authorities at museums and universities, and closely examine collection items relevant to their study.

In Dreyfuss-Deseigne’s case, he chose to focus on something new in the field of conservation: the use of nanocellulose films as mending materials. His research subject is typical of the tightly focused research projects generally developed by Fellows, who truly receive opportunities to follow their passions. CCAHA Director of Conservation Mary Schobert—who herself served as an apprentice at CCAHA in the mid-1980s—remembers two particular past research projects that both inspired the Fellows and ultimately benefited the field of conservation.

In 2002, NEA Fellow Erin Murphy investigated the odd deterioration patterns visible in a group of 22 Diane Arbus photographs, part of Arbus’ Untitled series. Murphy’s detective work led her both to the Museum of Modern Art for consultation and analysis with their photograph conservator and to the New Jersey State Museum, the owner of the photographs. While her analyses ultimately didn’t yield a simple solution for reversing the problem, they provided a needed set of guidelines for long-term preservation of the classic photographs.

As Murphy remembers, “My research project at CCAHA has really been one of the highlights of my career so far... It helped me look and think more critically at preservation problems and keep an open mind.” Today, Murphy brings her expertise—partially honed in the CCAHA laboratory—to her job as the Paul M. and Harriet L. Weissman Senior Photograph Conservator at the Weissman Preservation Center at Harvard University.

Schobert is also regularly reminded of the stellar work of 2001 NEA Fellow Maurizio Michellozi. His project involved the assembly of a very practical sampling of ways to mend and insert parchment, demonstrated through the use of expendable parchment pieces. His experimentation with a broad range of techniques—enjoying the freedom to occasionally venture outside the confines of normally approved treatments—proved to be of both immediate and long-term value to CCAHA staff. During a subsequent fellowship at the Cleveland Museum of Art, Michellozi continued his investigations into parchment mending techniques, eventually publishing his findings in The Paper Conservator. Today, he works as a conservator in Italy, and is currently involved in a major treatment of Raphael’s preparatory cartoon for The School of Athens at the Ambrosiana Museum in Milan.

Most Fellows look back on their time at CCAHA as being a critical part of their education in the art and science of conservation. Samantha Sheesley, a 2007 NEA Fellow now serving as the first-ever Paper Conservator at the Virginia Museum of Fine Arts, collaborated with the Smithsonian American Art Museum on preservation guidelines for their collection of mixed-media art by Joseph Cornell. She remembers, “I found that every discovery triggered additional questions and possible research avenues… It was a wonderful feeling to be a part of something so big and so important.”

For her research project, Laura Wahl, a 2005 NEA Fellow now serving as Library Conservator at the Hagley Museum and Library, developed a set of foundational recommendations that were subsequently used in establishing CCAHA’s digital imaging studio. Wahl pursued her interest in the rapidly-changing field of digital imaging at a transitional time when CCAHA was still using traditional slide images for the “before and after” documentation required for professional conservation treatment. After Wahl’s fellowship, CCAHA Photograph Conservator Rachel Wetzel and others built upon her work in realizing her dream of a fully-equipped digital imaging studio at CCAHA working in tandem with the conservation laboratory.

Current work by Brook Prestowitz, the 2015-16 Kress Fellow, and Marianne de Bovis, the 2015-16 Mellon Fellow, may sound extremely technical to the layperson yet is of potentially great importance to the field and the CCAHA lab. Brook is exploring the use of gellan gum gels in paper conservation and Marianne is preparing a set of guidelines based on the latest findings about humidification of iron gall inks. And in Paris, an international cohort of conservators has benefitted from Dreyfuss-Deseigne’s findings that link new conservation techniques with the latest research into nanotechnologies. Visionary work like this is solidly in the 39-year tradition of nurturing talent, insight, and creativity in the CCAHA treatment laboratory.