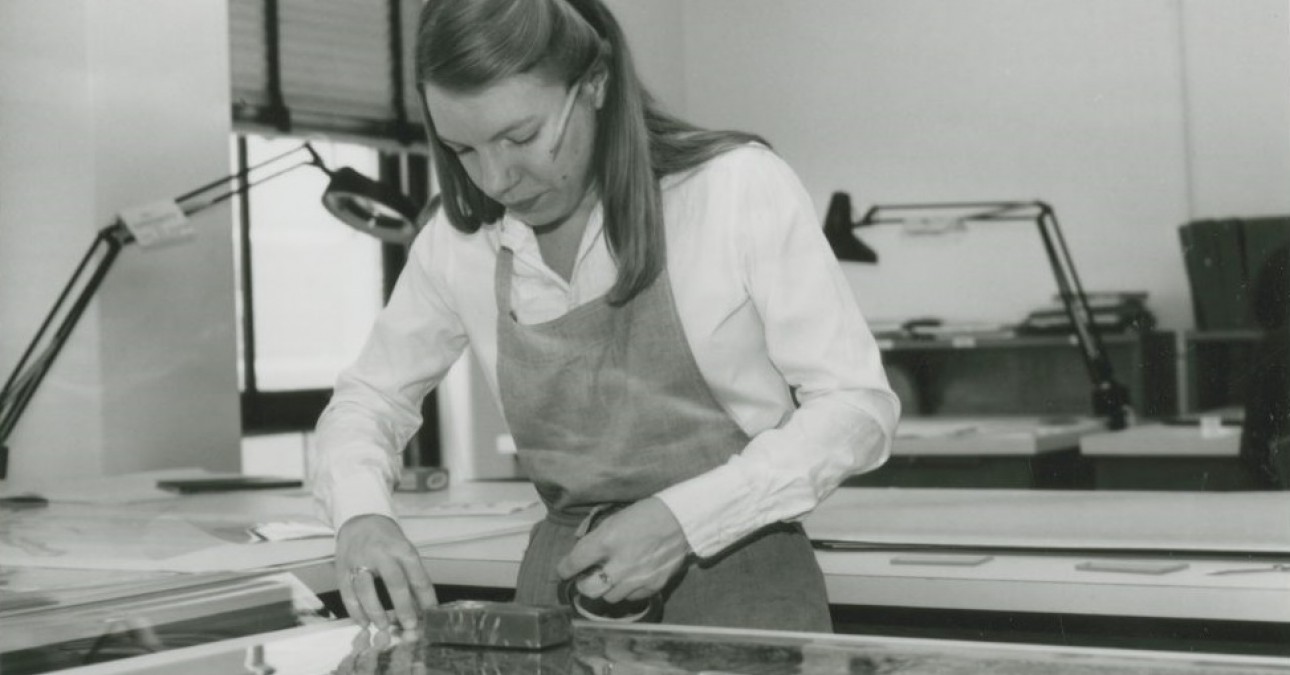 An Interview with Mary Schobert

CCAHA's Director of Conservation is our veteran staff member—here for 35 years! She looks back on favorite projects and tells us how CCAHA has changed over the past four decades.

When did you start working at CCAHA? What was your position?

I began on the first working day of 1982. I was hired as CCAHA’s first conservation technician. While completing my MFA, I had worked in a conservation lab. Jobs at that time were slim for artists, and I realized that I really enjoyed the conservation work. The conservator I was working with recommended CCAHA.

How has CCAHA changed while you’ve worked here?

Obviously, it’s grown a lot—we’ve added a book section, preservation services department, and digital imaging lab. On top of that, it has professionalized. At that time, conservation was still working to establish itself as a profession that required graduate degrees and not simply a craft learned by apprenticeship.

What were some of your favorite projects?

You know, it’s funny—I think of myself as an artist and a visual person, but many of the things that come to mind aren’t images, they’re written texts. We had documents from the Missouri District Court; things like the papers from the Dredd Scott case… these were lawsuits filed by slaves, fascinating and memorable documents that changed our country. Another project was the personal archives of William Penn held at the University of Pennsylvania. Today, we don’t necessarily think of Penn as a writer, but he wrote about his wife’s death in the most moving and beautiful way.

What were some of the most difficult projects?

Many of the most technically-difficult things we do are also the most common. Though it’s neither glamorous nor uncommon, removing Scotch tape from newspaper comes to mind—it’s very difficult. I also once treated a platinum print by Thomas Eakins that had insect damage and required inpainting. It was very difficult, but I loved it, so it didn’t feel like it!

What has been the most rewarding aspect of this work?

First of all, seeing the objects that come through the lab is always a thrill. There are some days I just can’t believe spending time with these objects is my job. As a conservator, you also feel lucky because you can contribute to the preservation of these objects as well.

Perhaps the most rewarding aspect of working at CCAHA, however, has been the staff. I’ve had the privilege of working with wonderful people—intelligent, dedicated, and mission-driven. Conservation has been a collegial field from its foundation, and CCAHA staff members are always eager to share knowledge. It’s also been so satisfying to see so many successful conservation careers launched by a fellowship year at CCAHA. Our fellows have gone on to play such a meaningful part in the development of the field.