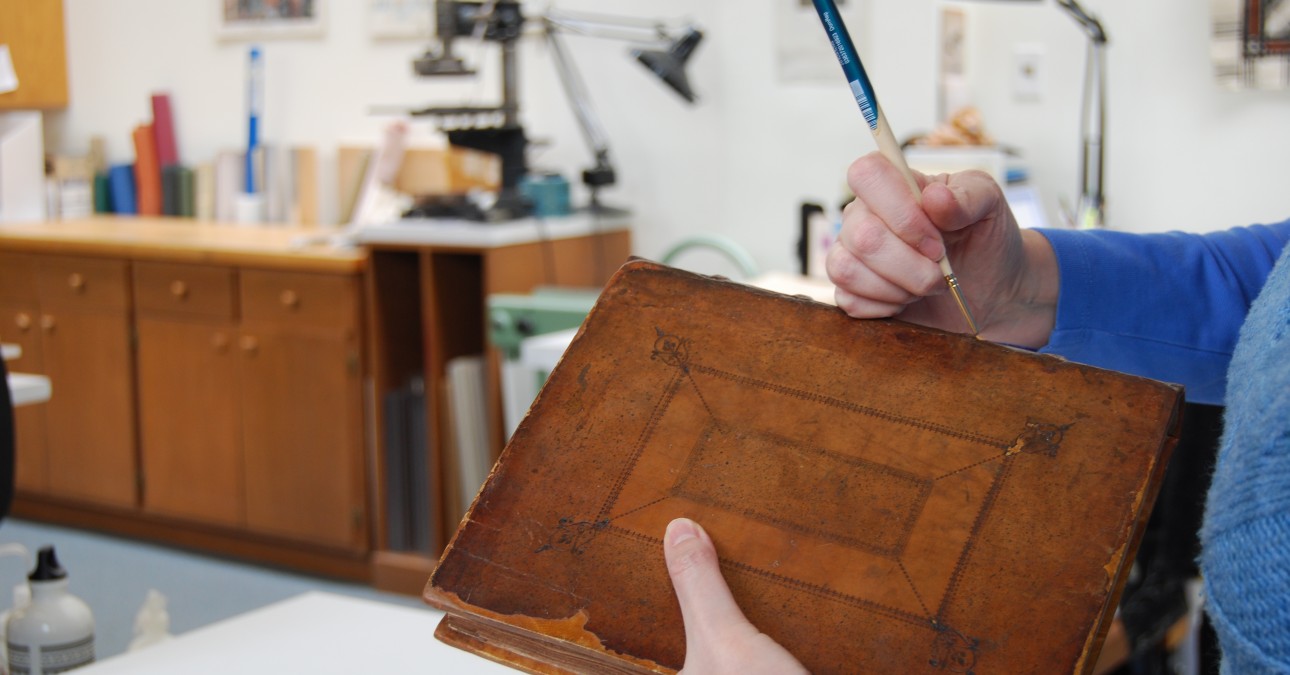 Newton in the Lab

While William Marshall Bullitt (1873-1957) is best remembered as a successful lawyer and outspoken critic of Alger Hiss, he had two private passions: mathematics and book collecting. In 1936, inspired by a discussion with mathematician G.H. Hardy, Bullitt set out to acquire first edition texts by 25 of history’s most influential mathematicians. A decade later, he had assembled more than 300 volumes by 60 mathematicians and astronomers.

Several volumes from the collection recently came to CCAHA for treatment, thanks to a grant from the Stockman Family Foundation. Each of the treatises, which were published between 1537 and 1713, represents an important moment in the history of scientific publication. Two of these texts were written by Sir Isaac Newton.

Newton’s most famous work is his Philosophiæ Naturalis Principia Mathematica (Mathematical Principals of Natural Philosophy)—today, simply referred to as Principia. Published in 1687, the text answered scientific questions with mathematical answers, laying the foundation for the modern field of physics and shaking the scholarly community to its core.

In Principia, Newton proposed three laws of motion. The first law states that an object in motion remains in motion. The second shows that the force on an object can be calculated by multiplying its mass and acceleration (F=ma). The third law states that any force on an object is met with an equal and opposite force. Building off of these three principles, Newton also proposed a law of universal gravitation and theory on planetary movement. The publication of Principia launched Newton into the stratosphere of 17th-century scientific celebrity. The work’s legacy is staggering—some credit the text for single-handedly inspiring the Scientific and Industrial Revolutions.

Even a work as monumental as Principia will have errors, however. Printing in the 1680s was a lengthy process. If discrepancies were discovered after the main text was printed, an “errata” sheet was commonly added to the volume. It is this errata sheet that makes the University of Louisville’s Principia particularly notable. 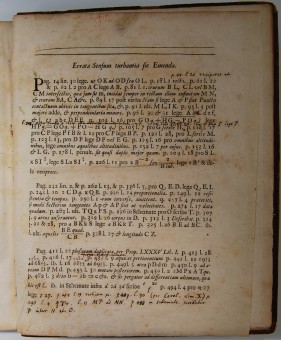 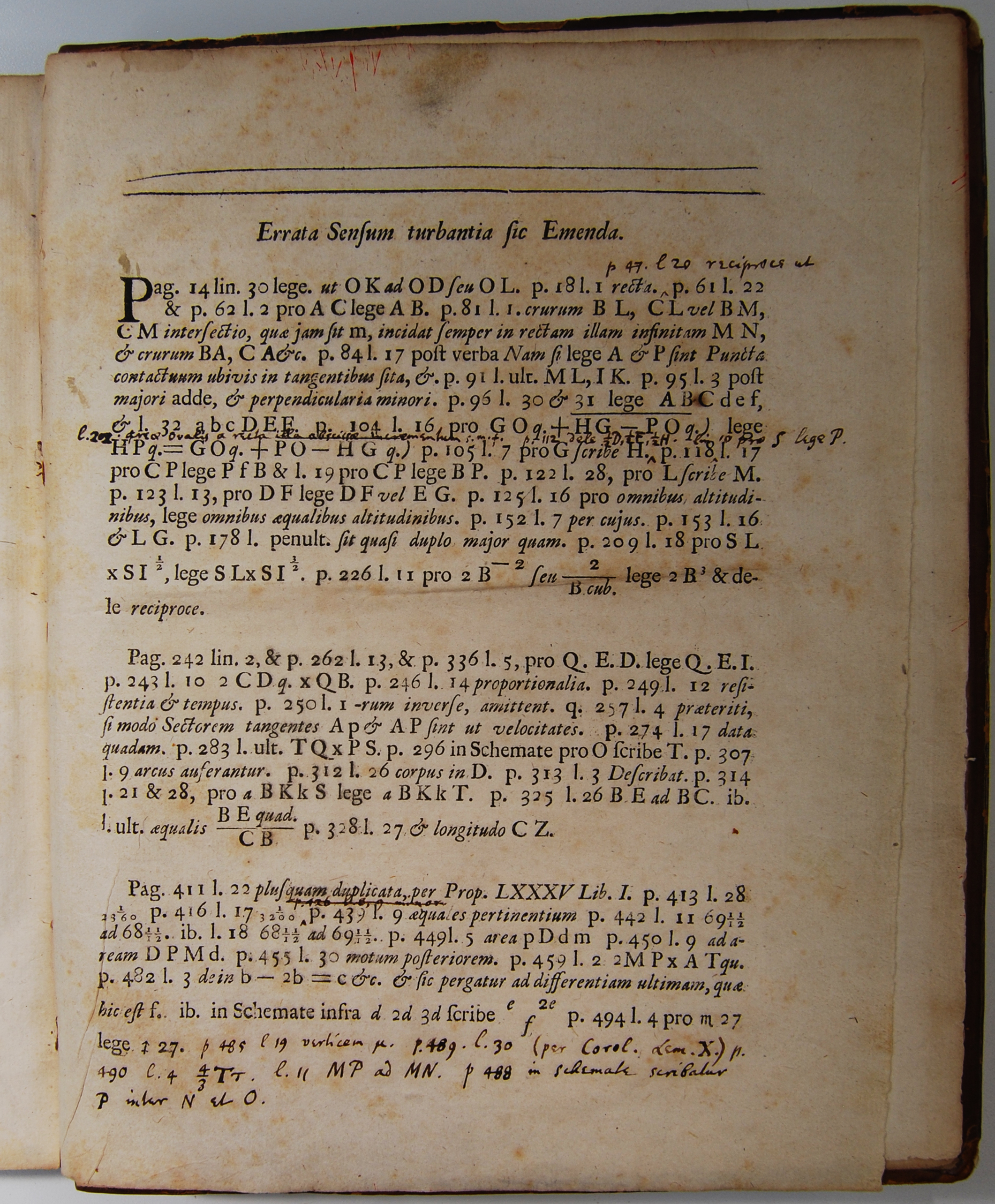 The errata page of Principia, with Newton’s handwritten emendations.

In 17th-century England, influential academics often had patrons—wealthy benefactors who provided the means for the scholars to carry out their work. One of Newton’s patrons was the Earl of Halifax, a wealthy aristocrat who met Newton at the University of Cambridge. Impressed with Newton’s ingenuity, the Earl supported the mathematician’s scholarly pursuits. It was most likely gratitude, therefore, which moved Newton to add several lines of handwritten emendations to the errata page of the copy of Principia that he presented to Halifax. Written in Newton’s neat hand, these lines, as well as a few interlinear notations, ensured that Halifax received the most up-to-date iteration of the first edition. In order to prepare the book for display, CCAHA conservators cleaned the pages, mended the cover, and reattached disengaged pages.

The University of Louisville also brought Newton’s treatise on optical science to CCAHA. In the third century BCE, philosophers hypothesized that “pure” light, like that from the sun, was white. This theory held until two millennia later, when Newton proposed that light is actually composed of various hues. He published these views in a revolutionary text called Opticks—the first scientific text to be published in English instead of Latin. Newton illustrated his points with beautiful foldout diagrams of prisms and refractions. Though not all of Newton’s assertions from Opticks are still accepted as scientific fact, the work remains a significant turning point in the history of understanding light.

The 1704 first edition that came to CCAHA needed repair. “The book’s text and lovely plates were in exceptional condition but its early 18th-century binding was so badly compromised that we reluctantly withheld it from study and exhibition for some years,” says Buie. When the volume arrived at CCAHA, both cover boards were detached, and the text block and spine had split into two pieces. Book Conservator Renée Wolcott removed the existing spine—weak, powdery leather from a previous restoration—and cleaned the exposed spine of the text block. She then added new sewing supports of linen cord, reinforced the book’s broken sewing, and rebacked the book with cotton cloth and mulberry paper. After mending the rest of the cover with mulberry paper, she toned the new spine and mended areas with acrylic paints to blend with the original leather. She also cleaned the leaves and plates of the volume, fixed dog-eared pages, and mended tears with thin mulberry paper and wheat starch paste.

Bullitt’s generosity parallels that of Halifax, some three centuries later. Both took an interest in mathematics, physics, and the works of Newton. We have Halifax to thank for the exciting, handwritten errata page of this text of Principia, and Bullitt to thank for donating the volume to be shared with the public. With CCAHA’s help, the University of Louisville will be able to display both of the Newton texts for years to come.