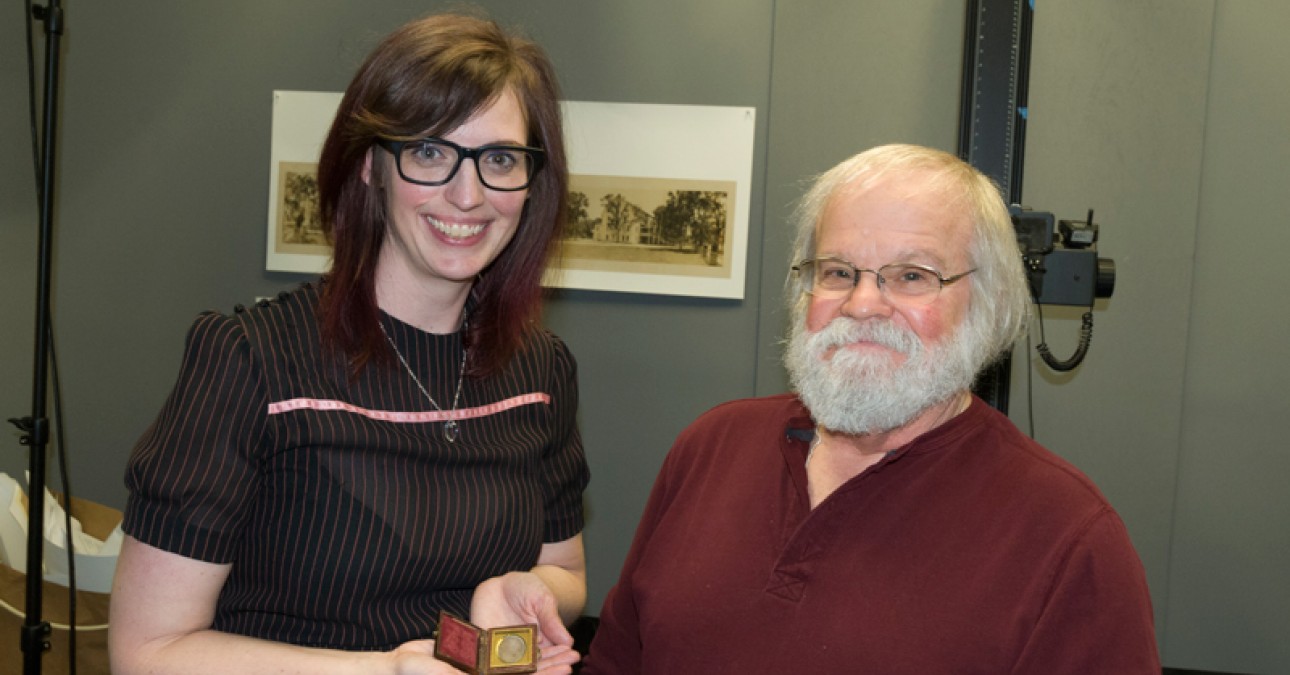 The 1830s were a dynamic time in photographic experimentation. On either side of the Atlantic, scientists and amateur hobbyists alike traded techniques and guarded discoveries as they sought to capture the world around them in a still image. The first widely-used method of photography was introduced in Paris in 1839 by a man named Louis Jacques-Mandé Daguerre. The type of photograph he invented bears his name to this day: the daguerreotype.

A daguerreotype is made on a light-sensitive, silver-plated sheet of copper. When this sheet is exposed to a sunlit subject and a discrete amount of mercury vapor, an image is created on top of the mirror-like surface.

The publication of Daguerre’s discovery in August 1839 sent a shockwave across the burgeoning photography community. In Philadelphia, a young man named Robert Cornelius began experimenting. Cornelius worked in his family’s lamp and chandelier shop and had a keen interest in science. In October 1839, in the backyard behind his family’s store, Cornelius took what is today heralded as the first “selfie”—the world’s first photographic self-portrait, in which a hazy, off-center Cornelius looks down lens. (To view this image, visit www.loc.gov/pictures/item/2004664436/)

Cornelius experimented with scientist Paul Beck Goddard, significantly improving the daguerreotype process. Their discoveries enabled shorter exposure times, which allowed them to use daguerreotypes for portraiture as well as landscape photography. Keeping this development secret, Cornelius quickly set up Philadelphia’s first photograph portrait studio. For the next three years, he honed his techniques, emerging as the foremost American daguerreotypist of the time. Daguerre himself sent daguerreotypes from France in exchange for examples of Cornelius’ photographs. After this relatively brief period, however, Cornelius returned to the family business, where he worked for the rest of his life.

The daguerreotypes that have survived into the modern era are often plagued with deterioration due to the corrosive nature of silver. Early attempts at cleaning daguerreotypes in the 19th and early 20th centuries involved either cyanide or thiourea (a sulfur-based chemical). While the results seemed effective initially, these early interventions are now known to be very damaging to daguerreotypes, as they leave behind corrosive spots and hazy residues.

When faced with treating a daguerreotype today, photograph conservators must ascertain if the photograph is gilded—taken after 1841 and coated with gold chloride. If so, there are several treatment options.

For example, the University of Louisville recently brought several gilded daguerreotypes to CCAHA for treatment. The photographs had been cleaned with cyanide and showed signs of corrosion. Since they were gilded, CCAHA Photograph Conservator Rachel Wetzel was able to carefully wash the plates to remove the corrosive stains and cyanide residues and ensure the longevity of the daguerreotypes.

Therefore, when the American Philosophical Society (APS) brought two ungilded daguerreotypes taken by Cornelius in 1839 and 1840 to CCAHA, Wetzel had limited options. Both of the daguerreotypes had been thiourea-cleaned in 1978, a treatment that had left white residue and corrosion stains on the plates, obscuring the images.

Wetzel and Lundgren decided to collaborate to fully explore treatment methods for ungilded daguerreotypes that have been thiourea- and/or cyanide-treated. They created a research team that includes Edward Vicenzi, Research Scientist at the Smithsonian’s Museum Conservation Institute; Mike Robinson, a modern-day daguerreotypist; and William Stapp, former Curator of Photographs at the National Portrait Gallery and author of a book about Cornelius. Wetzel will be presenting the first phase of the research at the International Council of Museums Committee for Conservation’s Photographic Materials Working Group Annual Meeting at the Rijksmuseum in Amsterdam in September 2016.

Alongside Wetzel’s research into the treatment of these daguerreotypes, she deepened her interest in the life and work of Cornelius himself. “Cornelius worked at a pivotal moment in the history of photography,” she says. In the first three years after the process was invented and during which Cornelius ran his portraiture studio, the daguerreotype process changed rapidly. “Since Cornelius was instrumental in many of these changes, you can gain a sense of the development of the daguerreotype through his body of work,” Wetzel says.

Records of Cornelius’ work are few and far between—there are scant mentions of him in scholarship and literature on the history of photography. He left behind no notebooks of his working methods or client lists. By piecing together the fragmentary allusions, however, Wetzel has been able to locate several undocumented Cornelius daguerreotypes.

One such photograph belongs to a direct descendent of Robert Cornelius. Wetzel reached out to Bob Cornelius, the photographer’s great-great-grandson, who came to CCAHA with a family heirloom: the second daguerreotype Cornelius ever made. Wetzel was able to examine the photograph, which provided valuable insight into the workings of Cornelius’ early portraiture.

Conservation is often described as a mix—a mix of science and art, a mix of technique and craft. Along with a passion for the scientific aspects of their jobs, conservators love the history and stories behind the objects they treat. It is perhaps no surprise, then, that while Wetzel worked on the daguerreotypes, her interest in Cornelius’ life and work was piqued.

Her research from this project has many possible resonances. Wetzel is contributing to the field of conservation science with her research on the treatment of ungilded daguerreotypes. Simultaneously, her work piecing together the timeline of Cornelius’ work contributes to the history of photography and of Philadelphia more broadly. Wetzel’s work is far from over, however. “We’re just getting started,” she says, “I can’t wait to see what we find next.” 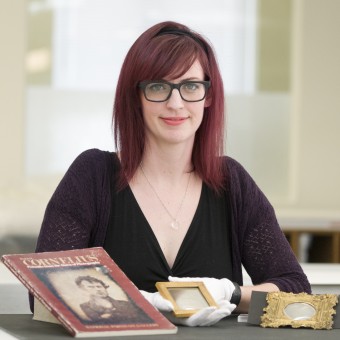 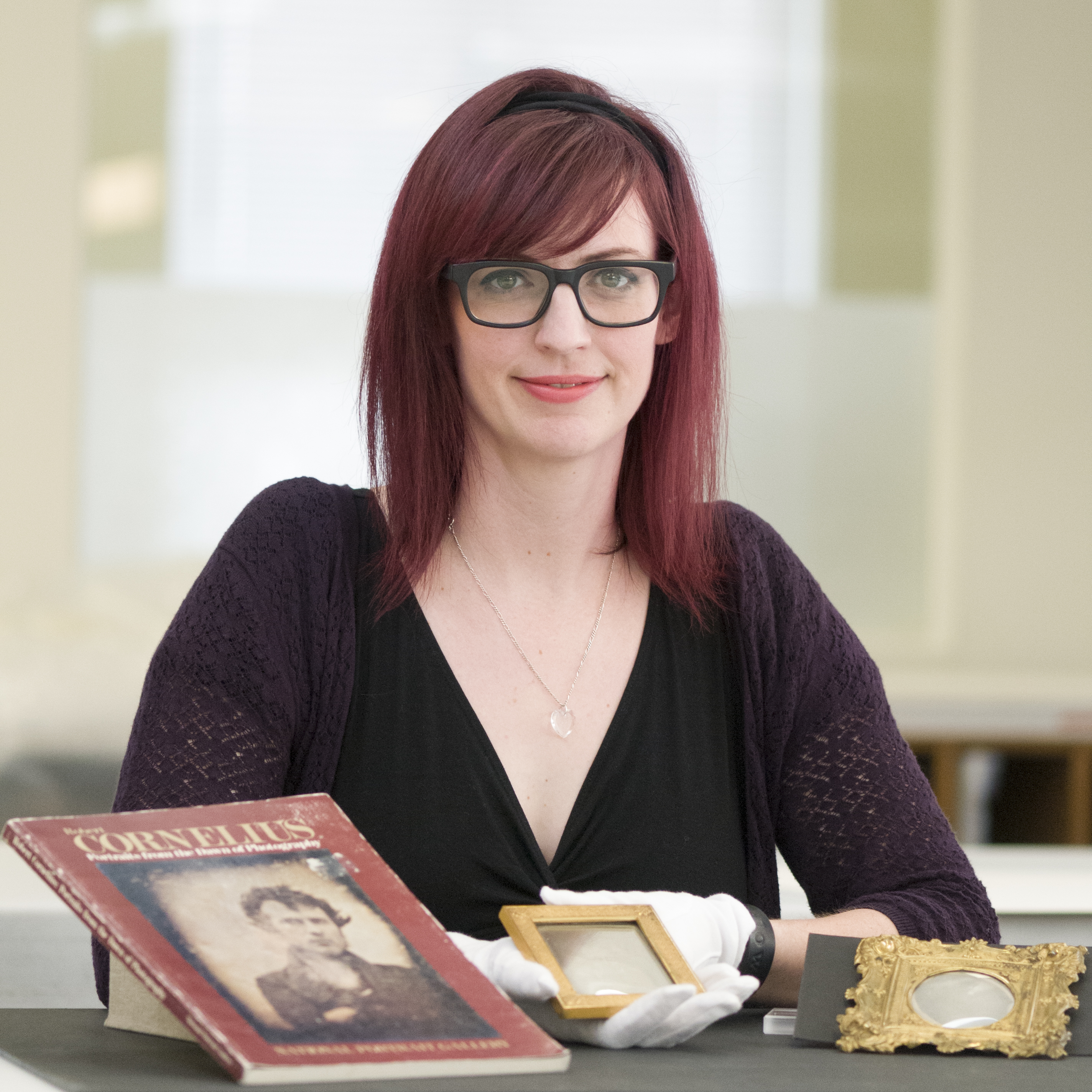