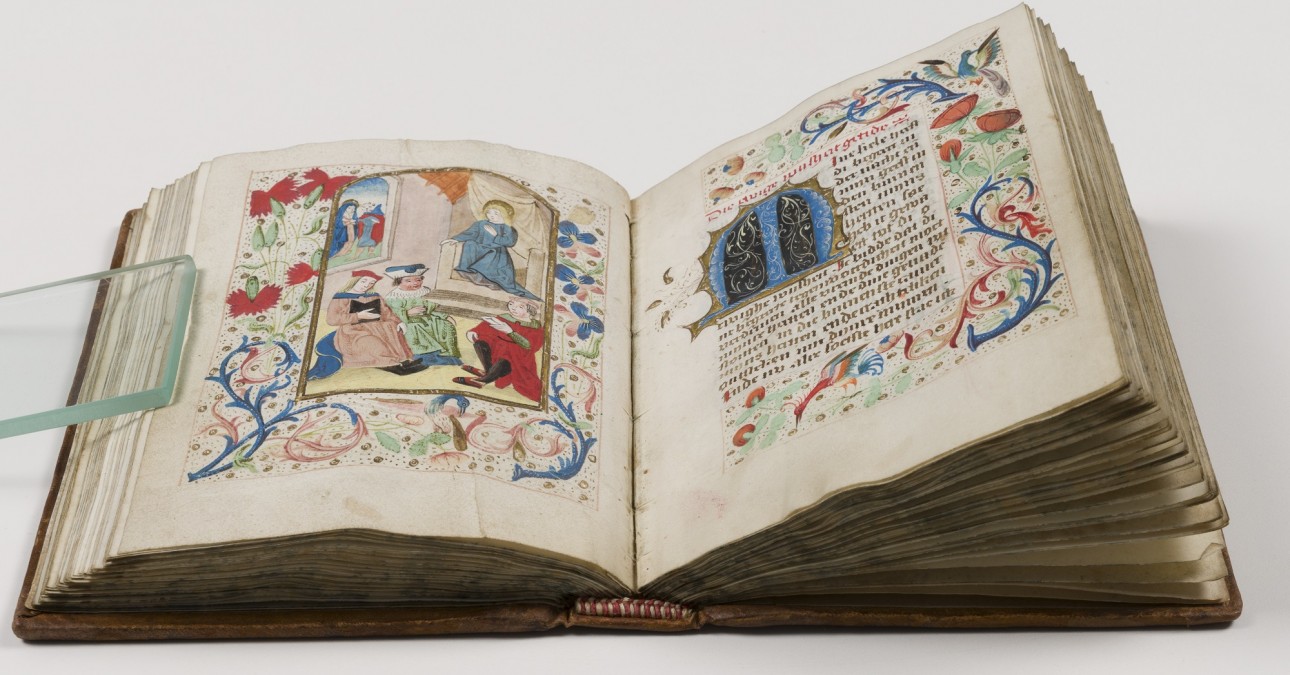 The Horae Beatae Mariae Virginis, or book of hours, is a Christian prayer book first popular in the 13th century. These volumes compiled prayers and psalms, sometimes with individualized texts or illustrations that reflected the identity of the original owner. While every book was unique, each included the Hours of the Virgin Mary, a devotion that dictated the practice of prayers at eight fixed intervals throughout the day.

The first books of hours were exclusive to nobility and ornately decorated, featuring illustrations of bible figures and local saints. Illuminated borders adorned texts and the beginning capital letters of each prayer were often individually embellished. As cities grew and literacy rates rose, these prayer books became gradually more standardized and readily available to the public. 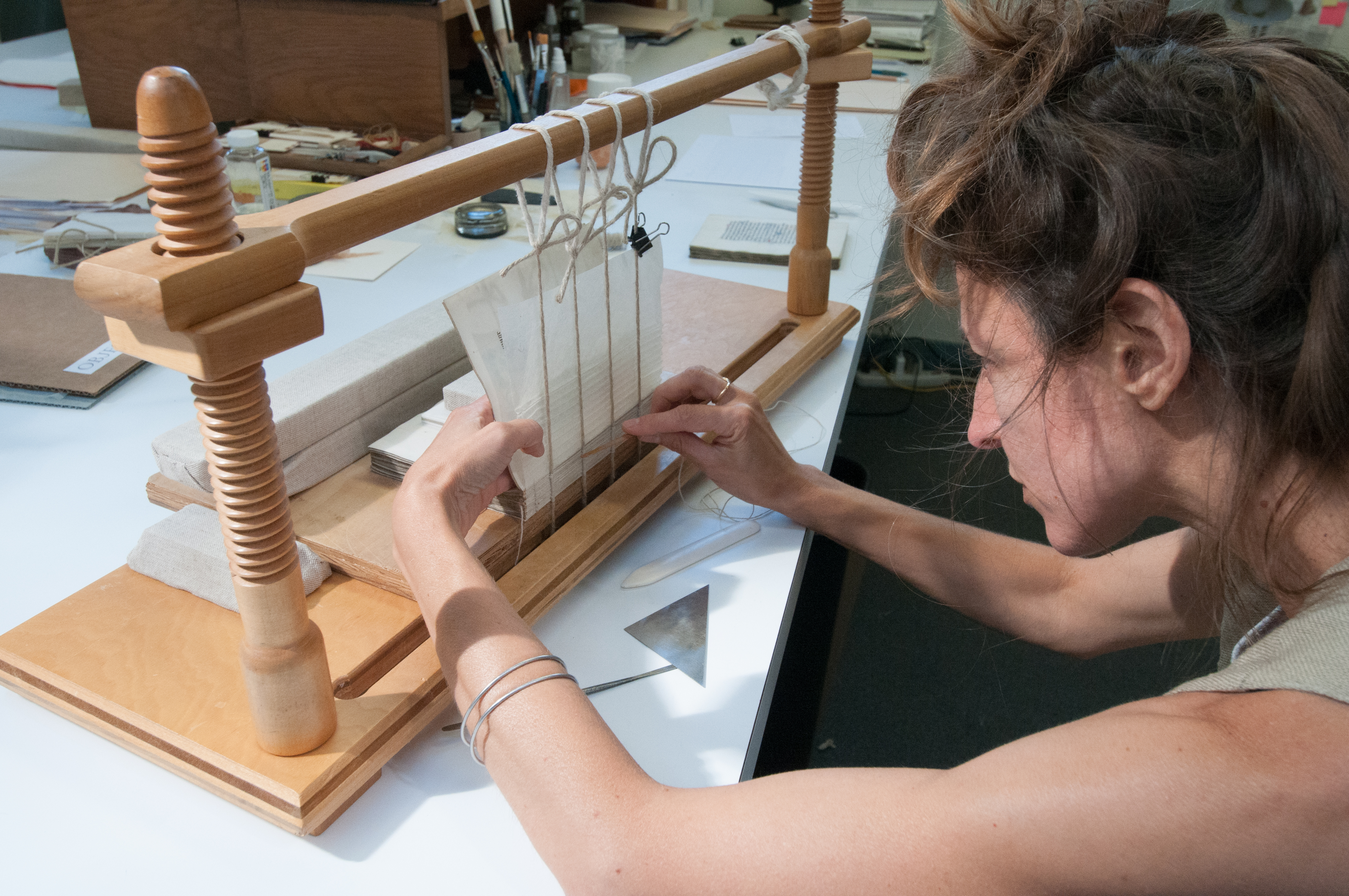 This particular copy, belonging to West Liberty University's Elbin Library in West Liberty, West Virginia, was printed around 1480. The volume arrived at CCAHA’s lab with a number of structural issues. The sewing was broken in a few areas; there were full to partial splits scattered throughout the bookblock; the adhesive consolidation and leather over the spine was desiccated and deteriorating; and the boards were loosely attached. The parchment leaves and the media were in good condition overall.

Book Conservator Amber Hares began by creating a collation diagram of the sewing and quire structure. The volume was then disassembled. The spine leather was faced with mulberry paper and hydroxypropyl cellulose (Klucel G) and carefully lifted away from the spine of the bookblock; the boards were released from the bookblock; and the leaves were separated from each other.

The parchment leaves were lightly surface cleaned, and vulnerable spine folds were mended with mulberry paper and gelatin in a cold, mousse state. The quires were resewn with unbleached linen thread over raised vegetable-fiber cords through a lightweight acrylic-toned mulberry paper concertina (above). Because parchment is especially sensitive to moisture, the concertina helps create a barrier between the parchment bookblock and the moisture of the adhesive used to consolidate and line the spine; it also facilitates an easy disassembly if necessary for future generations of conservators. 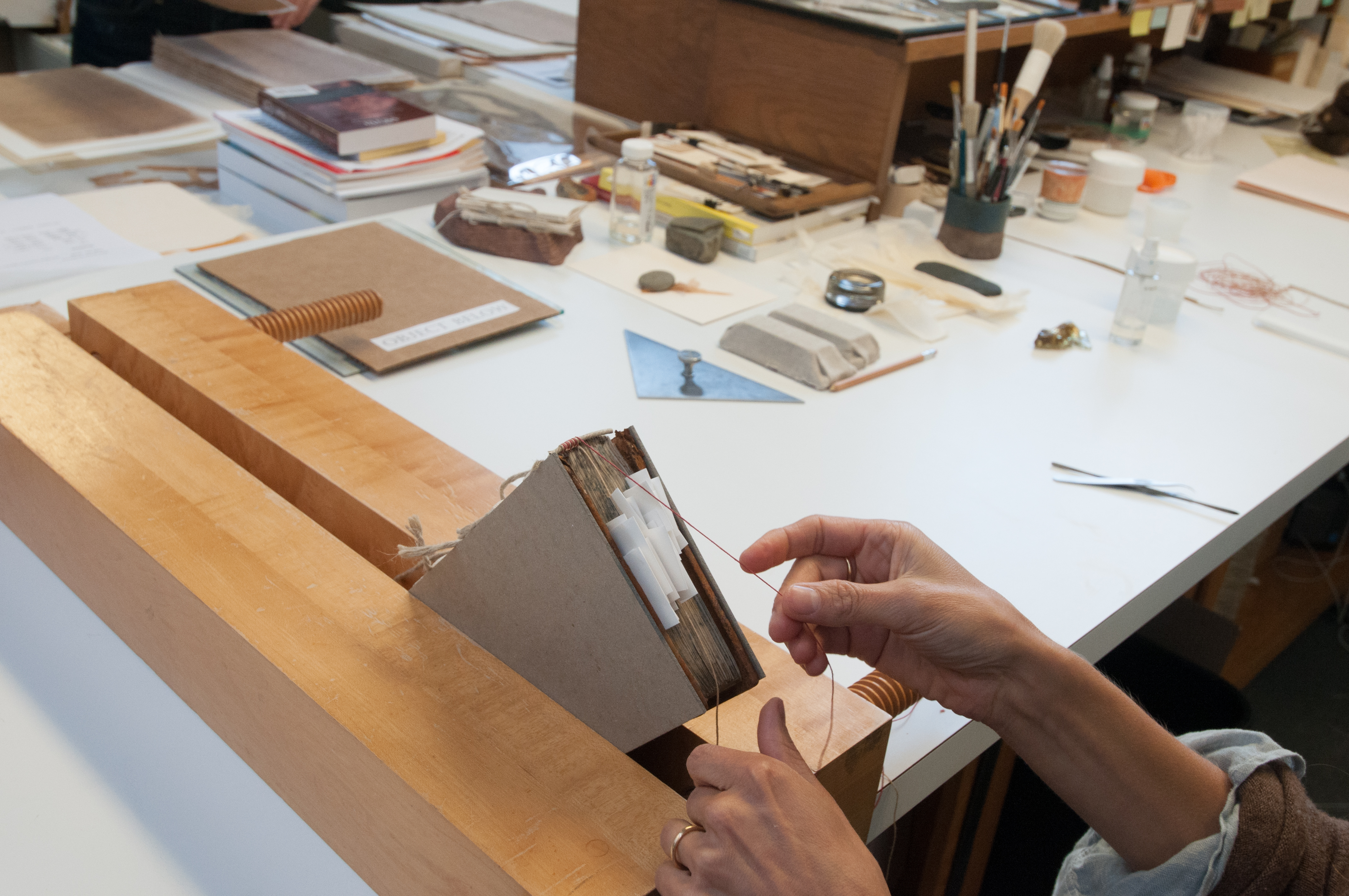 Once the bookblock was resewn, the boards were attached, the volume was rebacked with acrylic-toned cotton textile, and the original spine piece was readhered over the new cloth. Other steps conducted during the treatment include consolidating the friable media, consolidating the leather, sewing new endbands to the head and tail of the book that mimicked the previous endbands, and mending vulnerable areas of the cover boards (above).

With treatment complete, the volume was then housed in a custom-sized clamshell box constructed out of alkaline paperboard and covered in cloth. Retained fragments (e.g. sewing thread, endbands, patch linings), a copy of the sewing diagram, and photo documentation of the spine of the volume before and during treatment were properly housed and then placed in the clamshell box along with the volume. The book is now more structurally sound for handling, so the brilliance of the illustrations and decorations can be safely shared.