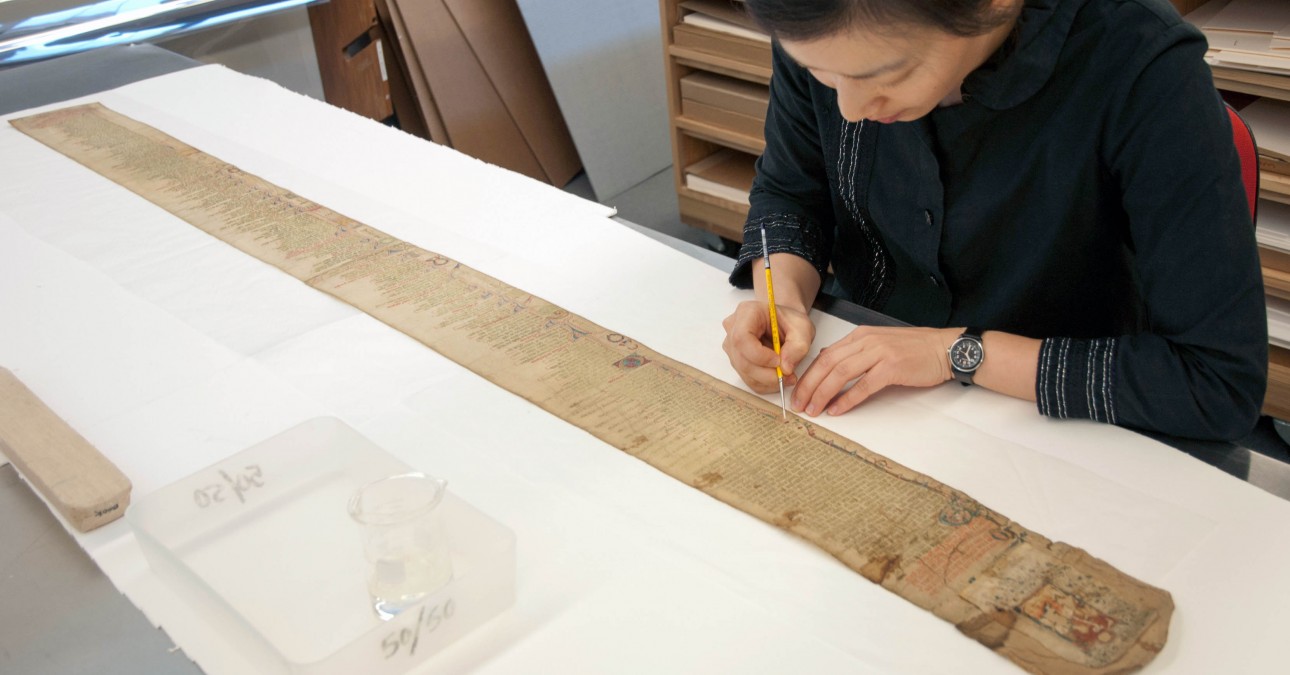 This Arma Christi Roll arrived at CCAHA as a rolled bundle of parchment, linen, and leather measuring just five inches wide and a few inches tall. When CCAHA Paper Conservator Minah Song unrolled it for examination, she revealed a nearly six-foot-long manuscript—one of just 20 known copies of the middle English O Vernicle poem in the world and, at over 600 years of age, quite possibly the oldest. 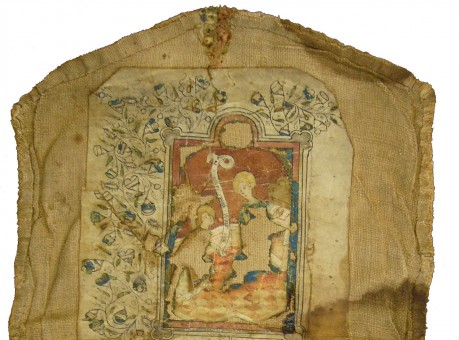 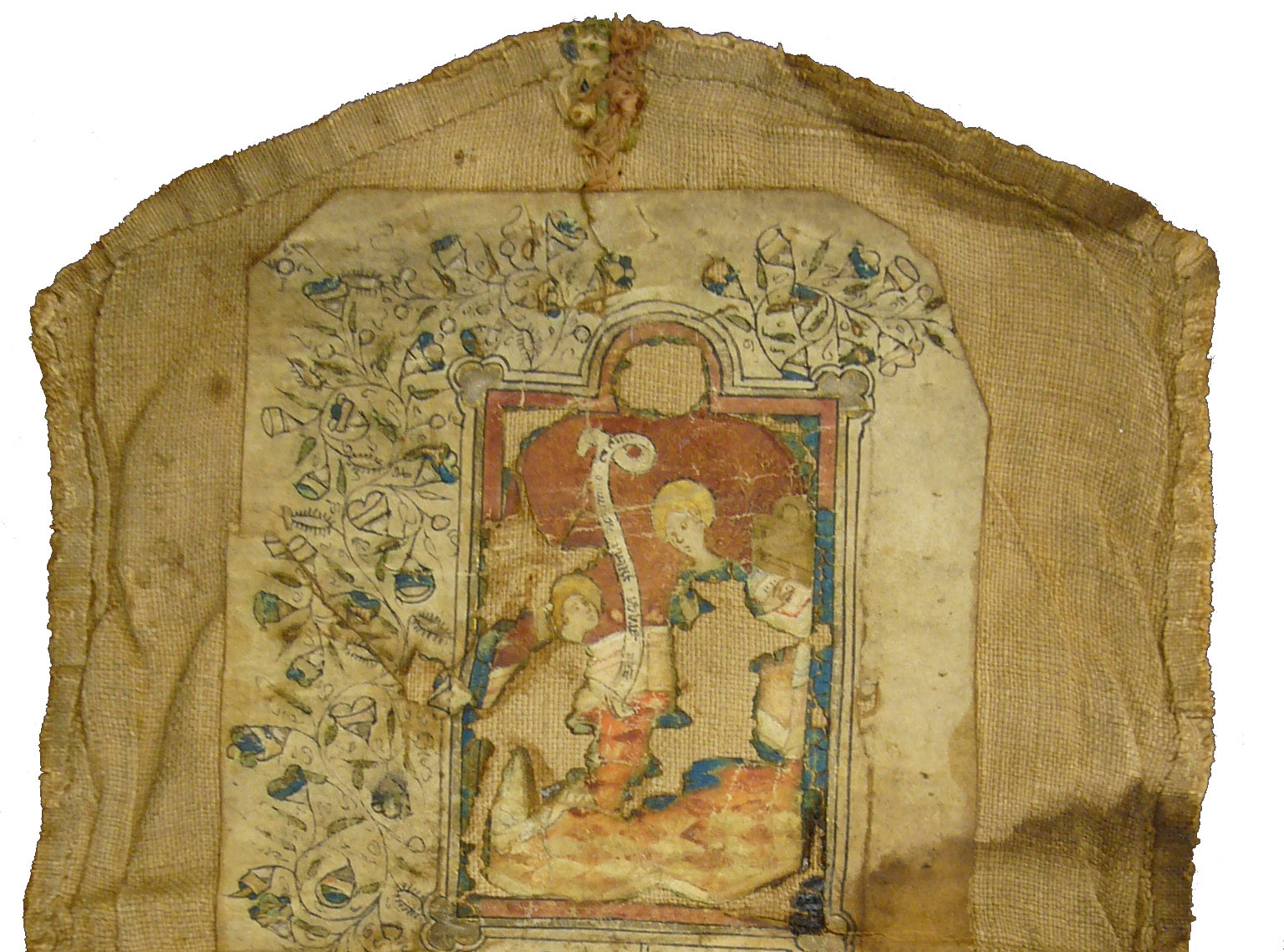 The first section of the manuscript has three layers: parchment with an image of Annunciation, a linen support, and a leather support

Scholarly debate continues regarding the role of O Vernicle in medieval Christian practice, but one likely suggestion is that the poem provided a guided meditation upon the events of Jesus’ passion to prepare individuals for their annual confession. This copy, which most likely originated in England between 1375 and 1400, features small images along the margins. The images depict the events and instruments of Jesus’ passion as mentioned in the prayer. For instance, a hand holding coins represents Judas’ betrayal, when he made arrangements for Jesus’ arrest in exchange for 30 silver denarii; the image accompanies a prayer that asks for freedom from treason and greed. A column and cords, representing those used to bind Jesus during his scourging, prompt a prayer seeking liberation from unkind deeds. 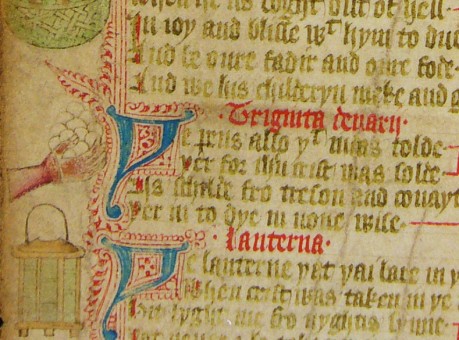 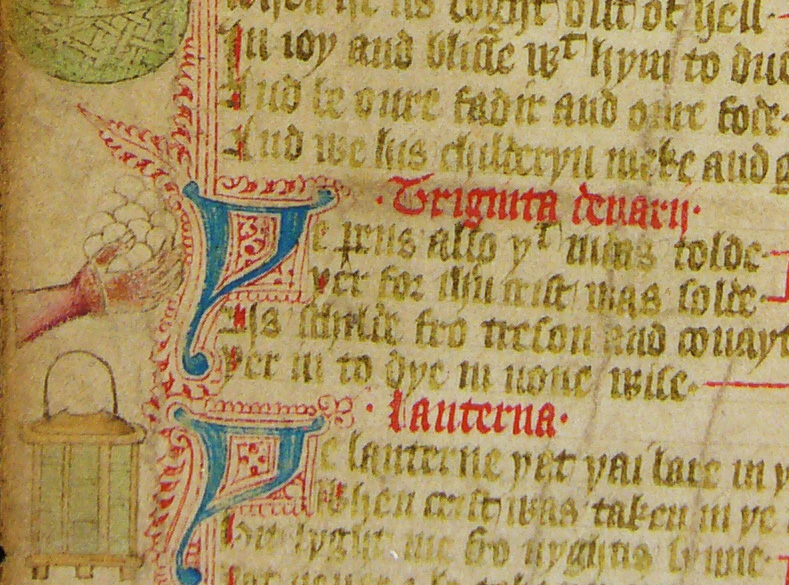 Close-up of the 30 denarii image

Several other texts also appear on this Arma Christi Roll. A prayer to Saints Quiricus and Julitta, the child and mother martyrs invoked during childbirth for their healing powers, indicates that the manuscript may have once served as a birth girdle. It would have been placed on a woman’s abdomen or wrapped around her waist during labor to protect her from complications. 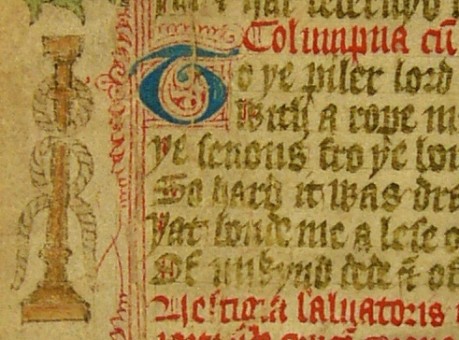 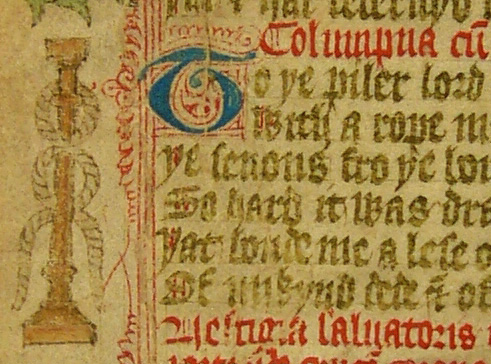 While the provenance of the manuscript is unclear, its current owner is the Redemptorists of the Baltimore Province, a Catholic clerical missionary religious institute. The Redemptorists first sailed from Europe to America in 1832 and worked with Native Americans and recent immigrants, opening parishes and schools. By the late 1800s, they were establishing seminaries to train their men in the United States. They began collecting books and manuscripts in Europe for these American seminary libraries. The Arma Christi Roll was one of the works added to their collection at Mount Saint Alphonsus, the Redemptorist seminary that opened in 1908 in Esopus, NY. When that seminary building was sold last December, the manuscript moved to the National Shrine of St. John Neumann, which honors the first Redemptorist to profess vows in America.

Before allowing researchers to study the manuscript, the Shrine wanted to ensure its safety. Although the media were in fair condition, there were some losses in the blue and red inks. Years of rolling had left creases throughout the manuscript, and it had discolored to brown, with darker discoloration along its edges and moderate surface soil overall. At CCAHA, Paper Conservator Minah Song consolidated insecurely attached media, surface cleaned the margins and areas of ingrained dirt, and repaired tears. She reinforced weak areas and locally flattened misshapen sections of the parchment. Before the manuscript was housed in a sealed package, CCAHA’s digital imaging studio produced a facsimile of its front and back. The facsimile will provide easy, safe access to the text’s informational content, while the sealed package will protect the original from pollutants and environmental extremes while in storage or on display.