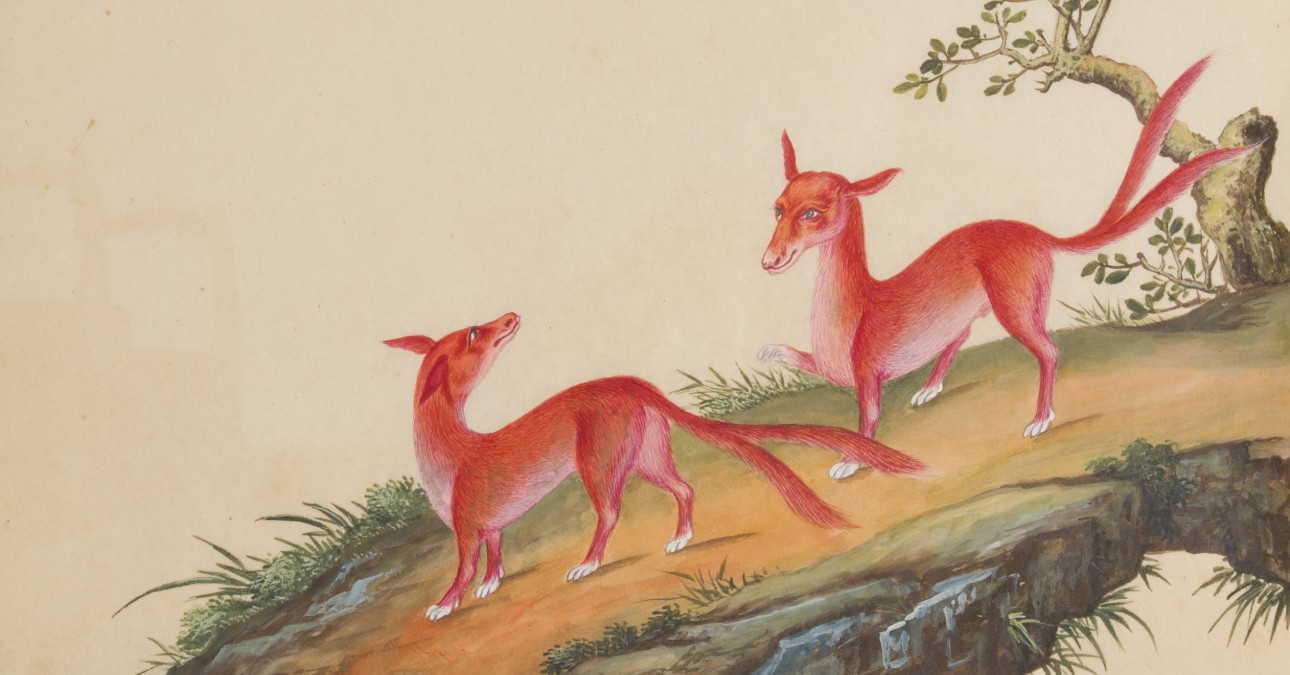 In April 2018, CCAHA’s Senior Paper Conservator Heather Hendry and Mellon Paper Conservation Fellow Juliet Baines began treatment on two albums containing 170 Chinese export paintings (c. 1650-1750) from the collections of the Academy of Natural Sciences at Drexel University. The paintings feature images of animals, insects, and plants, all skillfully painted in brilliant colors and with great attention to detail. Subjects include brightly colored birds seated on delicate blossom branches and butterflies, beetles, and spiders scattered across the page in an almost life-like manner. Other animals, such as a two-tailed pink fox, appear to be taken completely from fantasy. 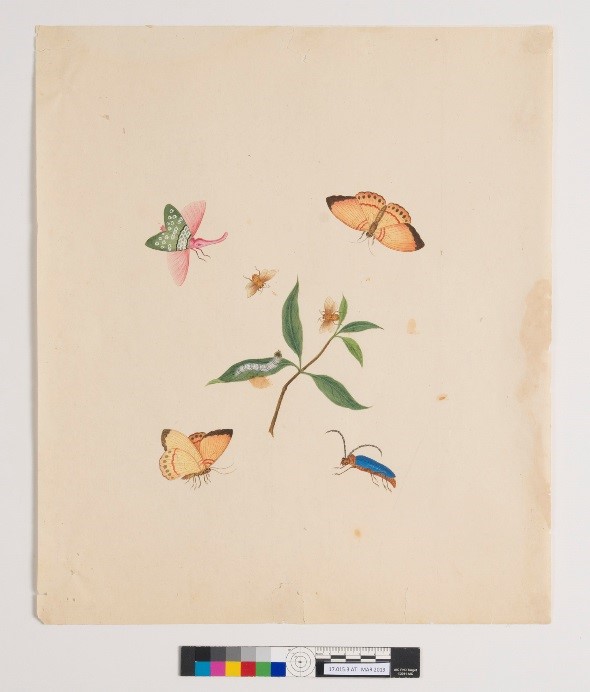 The collection was not only a treat to look at but also presented exciting challenges. The thin Chinese paper was extremely brittle, and handling the objects without causing more damage was nearly impossible. Moreover, there was a group of 15 paintings that were heavily discolored. The overall treatment of the paintings, which were mounted onto Western paper and bound into albums, was focused on stabilizing the papers to make the collection more accessible.

To achieve this, the paintings were first released from the Western paper backings mechanically. Dots of adhesive were reduced to the extent possible, and fragments were carefully collected and realigned. Each painting was then lined on a remoistenable tissue, which is made by coating mulberry paper with a mix of wheat starch paste and methylcellulose and allowing it to dry. The lining tissue is reactivated by spraying it with a fine mist of deionized water.

The discolored papers had an undercoating containing the white pigment lead carbonate. When this pigment reacts with pollutants in the air, mainly sulphides, it changes color. The basic lead carbonate converts to lead sulphide, which has a color that can range from light pink to black (see above left). However, lead sulphide can be converted to the white compound lead sulphate by exposing it to hydrogen peroxide. Although lead sulphate is chemically different from the original basic lead carbonate, it does have the same white color and is more stable.

In order to reduce the discoloration on the affected paintings, instead of humidifying the paper with only water, the paper was humidified in a vapor chamber with a 3% hydrogen peroxide solution. This resulted in a slow but steady chemical reaction in which the black lead sulphide converted to white lead sulphate. Depending on the size of the area and the color of discoloration, it took 4-12 hours of exposure to treat each individual object. In a dramatic time-lapse video shot by Juliet earlier this year, the viewer can see the ring of discoloration on the painting pictured above gradually reduce as it's exposed to the low concentration of peroxide gas in a vapor chamber.

With treatment complete, the paintings can now be safely handled by curators at Drexel, and discoloration no longer distracts the viewer from appreciating these beautiful images.