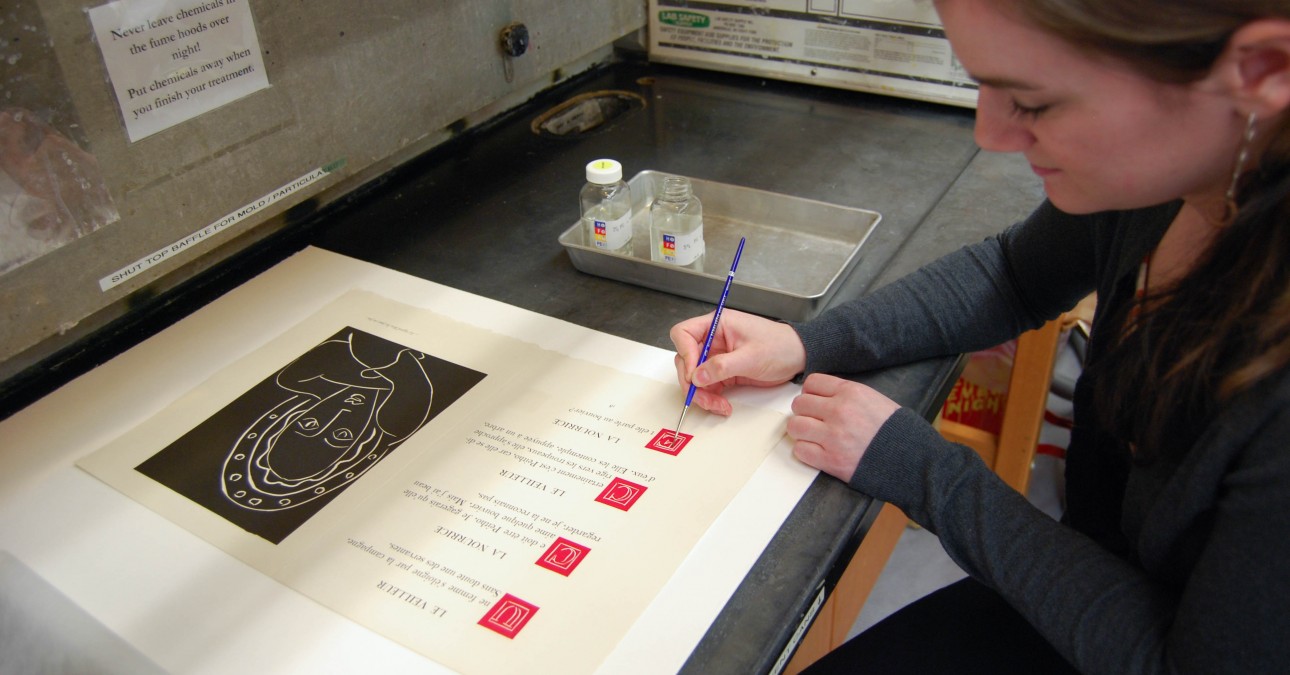 It wasn’t until he was in his late 60s that Henri Matisse—best known for his brightly colored paintings—began creating illustrations for artists’ books. He produced over a dozen of these limited editions, meant not just to be read, but collected and admired.

In his 1946 essay “How I Made My Books,” Matisse explains how he arrived at identifying the colors, kind of printmaking, and typography used for each book. “These elements are determined by the demands of harmony for the book as a whole,” he writes. “They are never decided upon before the work is undertaken, but develop coincidentally as inspiration and the direction of my pursuits indicate.” 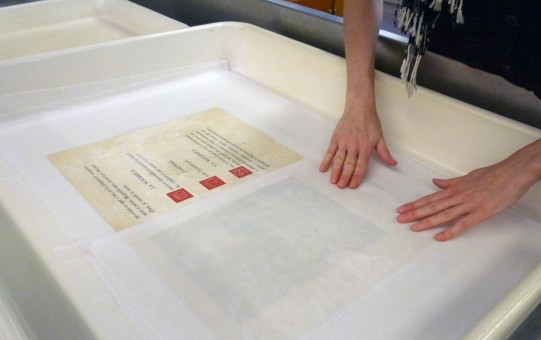 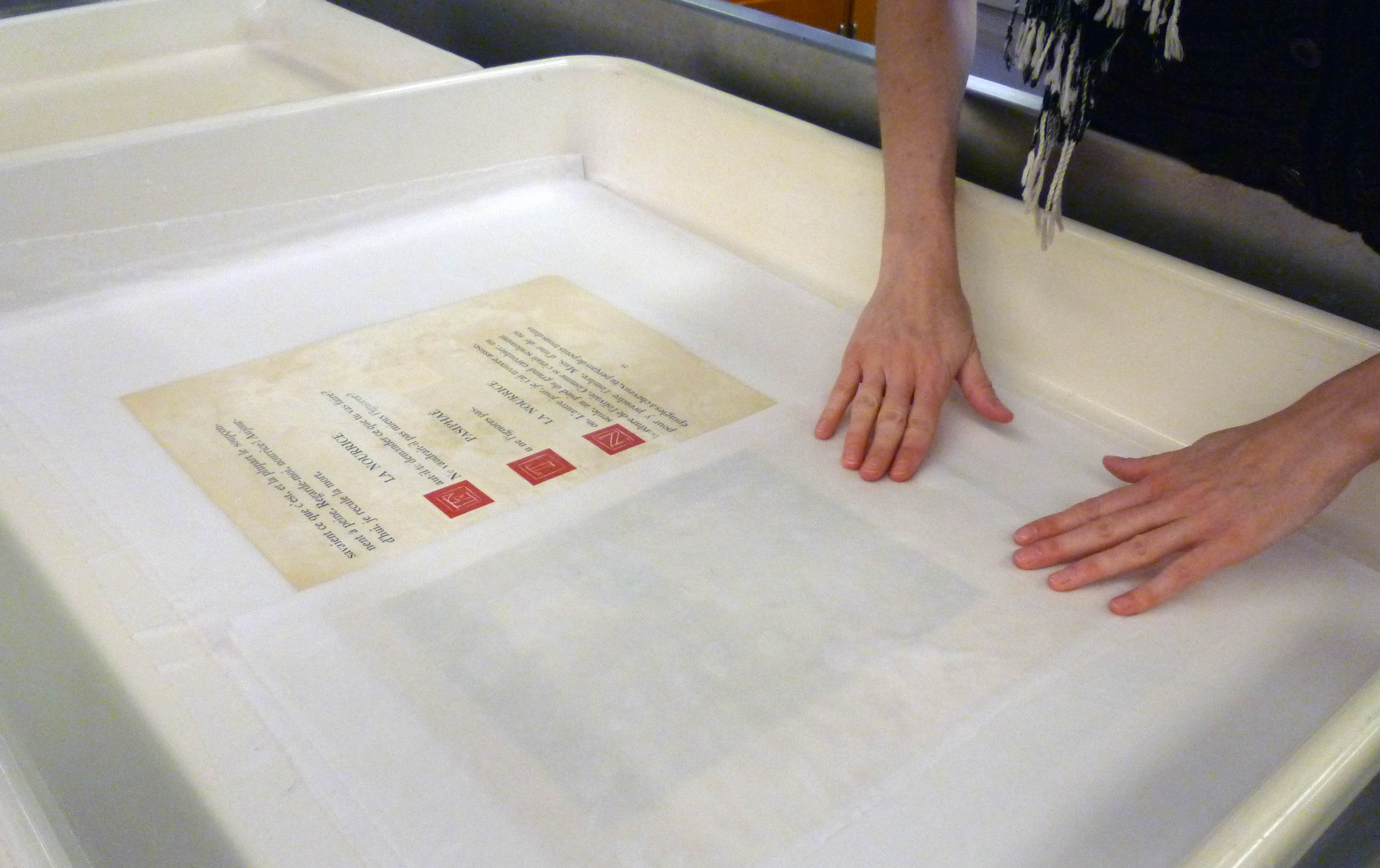 Washing a folio to reduce stains and discoloration

His process for Pasiphaé, Chant de Minos, written by Henri de Montherlant, offers a perfect example. In this 1944 retelling of a Greek myth, a curse leads Pasiphaë, wife of King Minos, to give birth to the Minotaur, a half-man, half-bull monster. Each of Matisse’s illustrations depicts a favorite phrase selected from the story. He started with linocuts, using a simple white line over a black background, but soon began to feel that there was a “rather bleak character” to the black-and-white book. To brighten it up, he added red initial letters to the text, first employing whimsical capitals, then switching to a “severe and classical conception, more in accord with the elements already settled.”

An edition of the beautiful end result recently came to CCAHA from the Bank of America Collection. The book’s 23 folios were secured in their window mats with poor quality linen tape hinges that had pulled and distorted the paper, creating cockles. Corner hinges from previous housings had left stains in the corners of the folios, which were discolored overall. 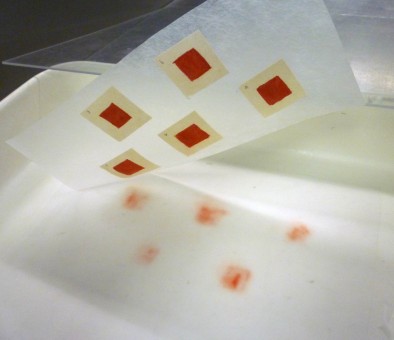 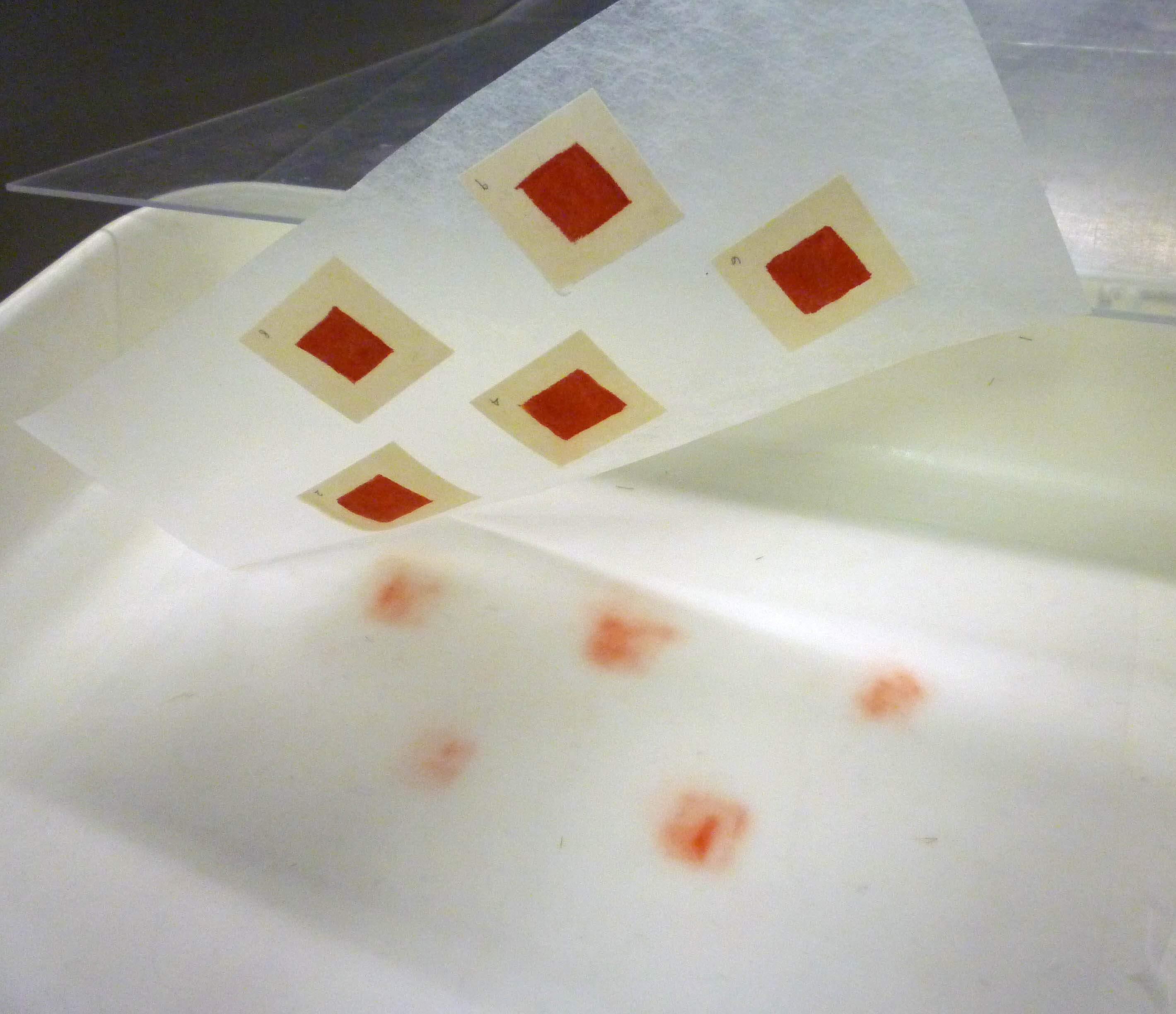 Before choosing a fixative to protect the red ink on the folios during washing, Edwards ran tests using watercolor swatches covered with a variety of fixatives; here, she displays one test result

After removing the folios from the window mats, CCAHA conservation staff Corine Norman McHugh, Gwenanne Edwards, Samantha Sheesley, Rachel Wetzel, Jessica Keister, and Marianne de Bovis washed the folios to reduce the stains and discoloration. But they faced a challenge—the inks used for Matisse’s red initial letters tested soluble in water, so they would run during washing. To find a fixative that could be applied to the letters to protect the inks, Edwards ran test baths using watercolor swatches covered with a variety of fixatives. Conservators applied two coats of the winning solution over areas of red ink before washing the folios. They then flattened them to reduce wrinkles.

Before their return to Bank of America, the folios were float mounted in window mats, placed into sealed packages that protect against environmental changes and pollutants, and fastened into their original frames.