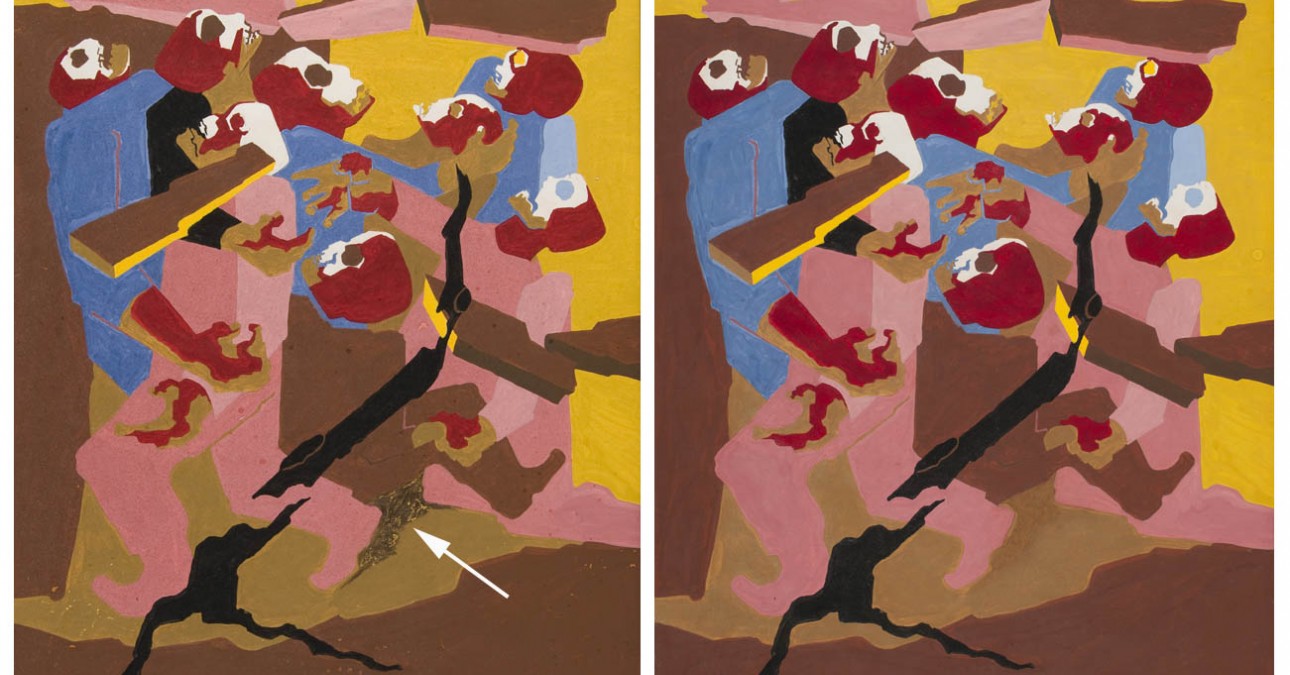 “A hundred thousand people were killed by the atomic bomb, and these six were among the survivors. They still wonder why they lived when so many others died. Each of them counts many small items of chance or volition—a step taken in time, a decision to go indoors, catching one streetcar instead of the next—that spared him.”

When John Hersey’s “Hiroshima”—which reported on the experiences of six people during the dropping of the first atomic bomb and its aftermath—appeared in The New Yorker on August 31, 1946, the 31,000-word article filled the entire issue. The magazine’s editors had decided to publish the story without other editorial content because they felt that few Americans had come to understand the devastating impact of nuclear weapons in the year since the attack. They wanted there to be no distractions from the survivors’ accounts—just as Hersey, with his objective and unsentimental writing, left readers with only the horrific facts. 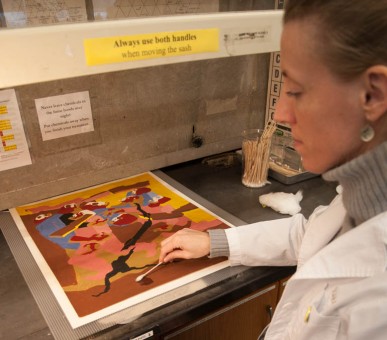 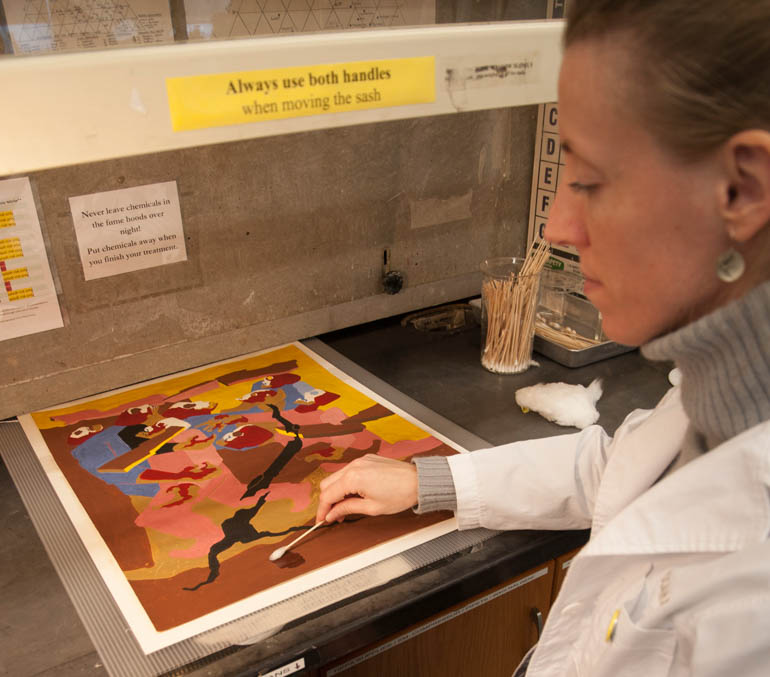 Commissioned in 1982 to create illustrations for a book of his choice, artist Jacob Lawrence (1917-2000) selected “Hiroshima,” which had been published as a book. Lawrence, the first African American artist to be represented by a major commercial gallery, focused on struggles for freedom and justice in his paintings, which were often in series format. In his Hiroshima series—eight paintings in gouache and tempera showing events that took place at the moment that the bomb dropped—Lawrence was inspired by Hersey’s words but moved beyond them, drawing from personal experience.

Shortly after acquiring the series, the Pennsylvania Academy of the Fine Arts brought all eight Hiroshima paintings to CCAHA to address two condition issues. Fixative had been sprayed unevenly over the surface of each painting, resulting in shiny areas and discolored speckles. Additionally, in spots where media had flaked off, someone had retouched the losses using paint and pencil, a distracting aesthetic repair. 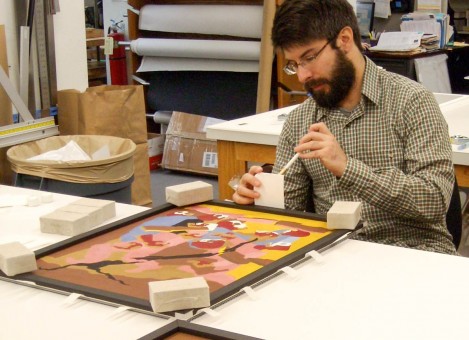 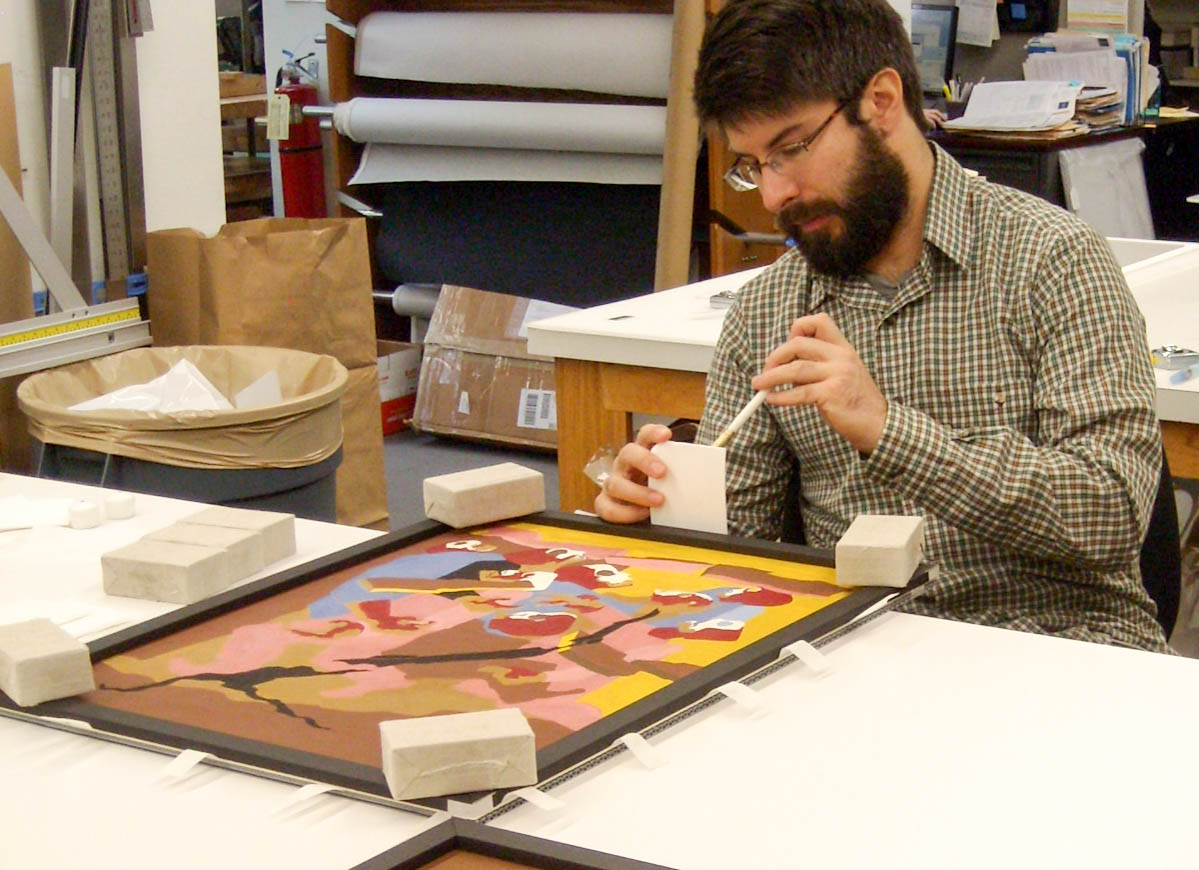 Paper Conservator Samantha Sheesley, Paper & Photograph Conservator Jessica Keister, and National Endowment for the Arts Fellow Gwenanne Edwards used cotton swabs soaked in solvents to reduce the fixative. Most of the paint used to retouch losses readily lifted on the swabs along with the fixative, while areas of graphite retouching were reduced with vinyl erasers. The conservators then inpainted the most distracting losses with pigments and pastel powder over an isolating layer. Finally, Manager of Housing & Framing Jessica Makin and Housing Technician Zac Dell’Orto fit the paintings into sealed packages, which were in turn fastened into black wood frames.