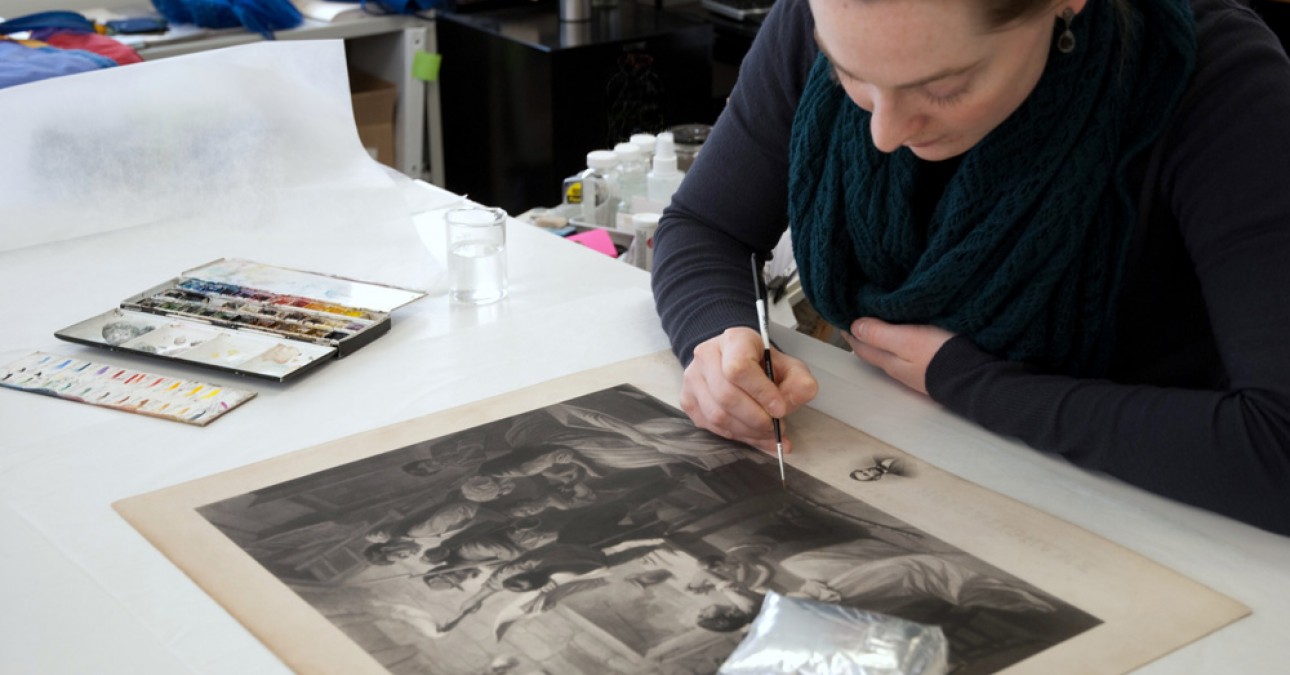 In the 1864 engraving Reading the Emancipation Proclamation, a group of slaves, possibly generations of a family, listens in joy and astonishment as a white Union soldier reads the presidential order granting their long-awaited freedom. One of the first prints of the era to depict African Americans in a heroic light, it differed from many images commemorating Lincoln’s proclamation in that it focused on the reactions of blacks rather than of whites.

A private client recently brought an original copy of this engraving to CCAHA. Although the print’s long history was evident in its physical condition—there were dark brown tide lines running through the top area, dark brown foxing spots on the back, several small tears and losses along the edges, and heavy surface dirt overall—its owner is not quite sure how her family came to have it.

She knows that her grandfather owned the print, although she never saw it while he was alive. When he died in 1966, Reading the Emancipation Proclamation, along with an engraving featuring the Lincoln family, appeared on the wall of her childhood home. “I was breathless when I first saw the engravings,” she said. “The reading is so stirring in its intensity and clearly induces shock to all characters hearing [this news] for the first time.”

The engraving before and after treatment

The client’s mother gave her both prints in 1995, and she and her family have treasured the engraving ever since. “Our copy is engraved also in our hearts,” she says, as it speaks to the family’s history throughout generations. One of her great-grandfathers, an informally trained engineer, served in the Union Army during the Civil War and fought in many battles, including Gettysburg. The client lived in Carlisle, PA, which had been shelled by Confederate troops as they headed to Gettysburg. Her children spent many hours of their childhood in Gettysburg, exploring the battlegrounds. “They loved climbing the rocks at Devil’s Den and following the trails made famous by the movies that were released during their childhood,” she said.

Preservation of the engraving ensures that the family will continue to enjoy it for years to come. National Endowment for the Arts Fellow Marion Verborg carefully surface cleaned it using grated vinyl eraser and a soft brush, being sure to protect the soft engraving inks. Next, she washed the engraving in successive baths of calcium-enriched deionized water to reduce discoloration and acidity and carefully light bleached it to further reduce stains. She mended tears and filled losses with Japanese paper and wheat starch paste, then inpainted the losses with pastels. Finally, she humidified and pressed the engraving between blotters, under weight, to restore its planarity.