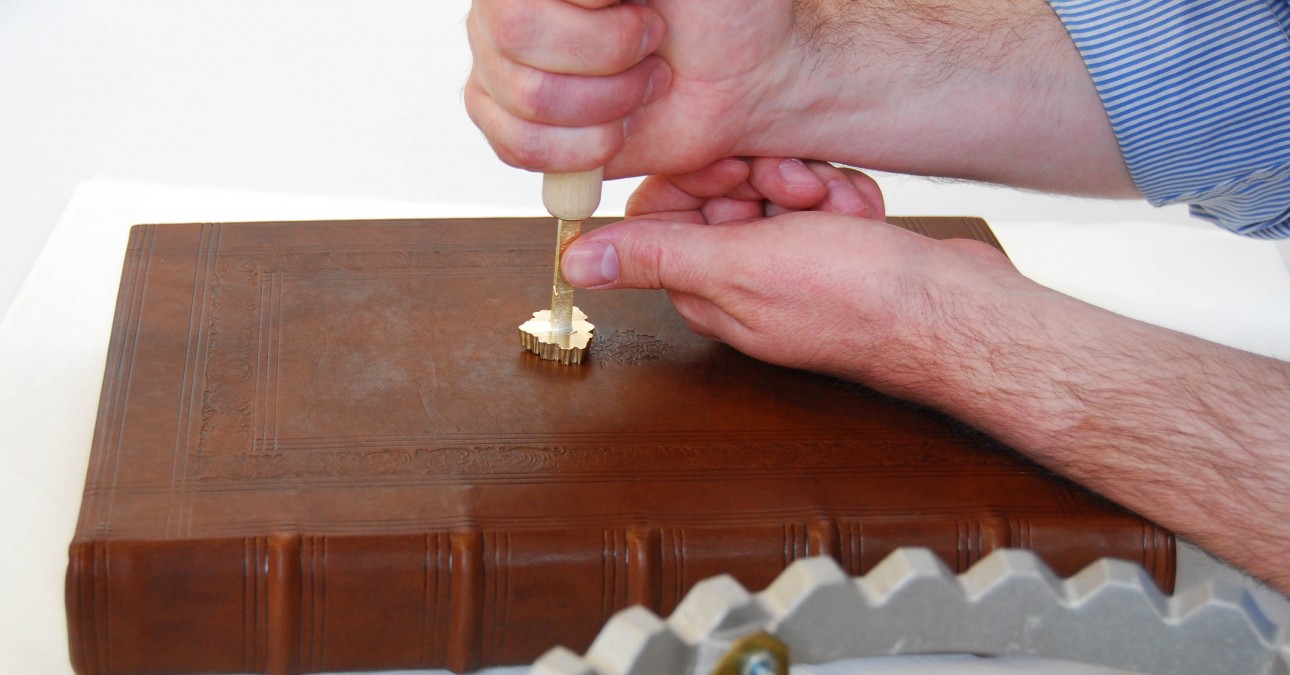 Every treatment project at CCAHA is the result of conversations between client and conservator. Some, like a recent project with the Rosenbach Museum & Library, inspire particularly exciting collaboration.

The Rosenbach brought a rare Hamishah Humshe Torah, or Bologna Pentateuch, as it is more commonly known, to CCAHA for rebinding. The volume, a landmark printing of an Aramaic biblical commentary, was printed in 1482. Dr. A.S.W. Rosenbach purchased the Pentateuch in 1924 from a collector in London, whereupon he sold it to another book collector, who promptly resold it. In 1934, ten years after his original purchase, Rosenbach bought the volume again. 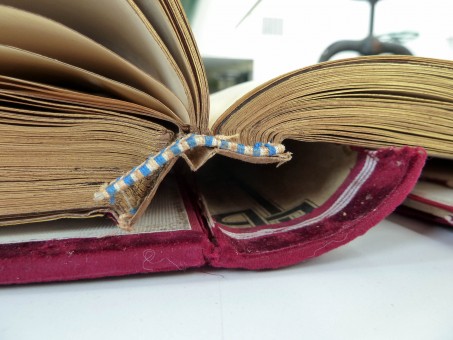 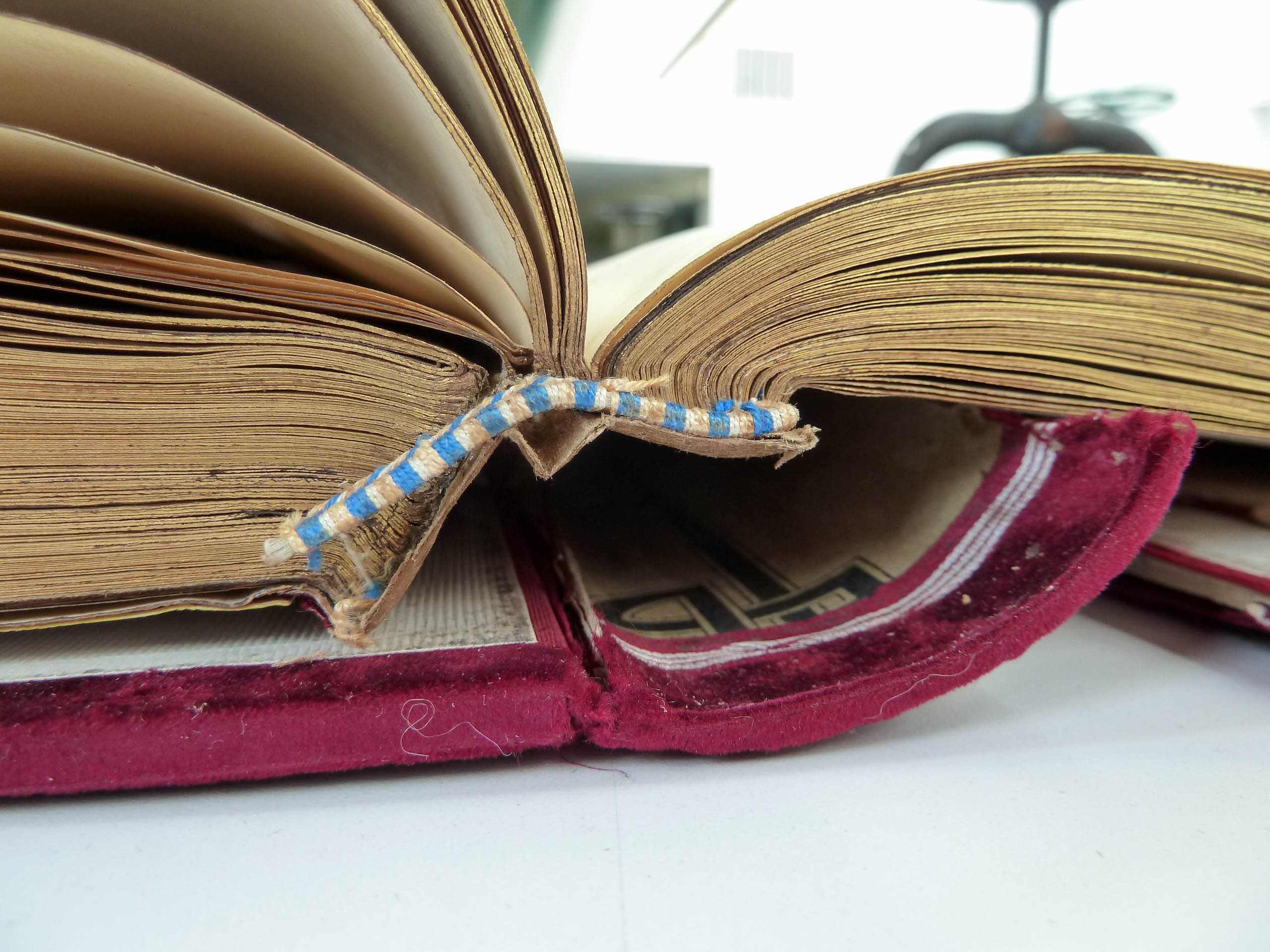 The Pentateuch when it arrived at CCAHA. The velvet binding was detached from the text block.

In the span of ten years, the Pentateuch passed between five different sets of hands. This is especially awe-inspiring when one remembers that the book existed for 442 years before 1924. The book’s provenance prior to 1924 is under research, as it is relatively unknown. What is clear about the manuscript’s life in the four centuries between when it was printed in 1482 and when it came into A.S.W. Rosenbach’s hands is that it was rebound in purple velvet.

When the Pentateuch arrived at CCAHA, its velvet cover was in critical condition. The front cover was completely detached, the spine of the binding was falling away from the text block, and the back cover was attached only tenuously by the velvet itself. Under the velvet, the spine of the text block was lined with so many layers of brown paper that the movement of the spine was restricted. Inside the binding, the pages of the book exhibited minor wear: dirt on the edges of the leaves, insect holes, and a few tears. 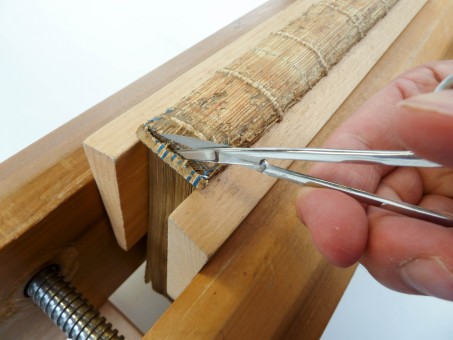 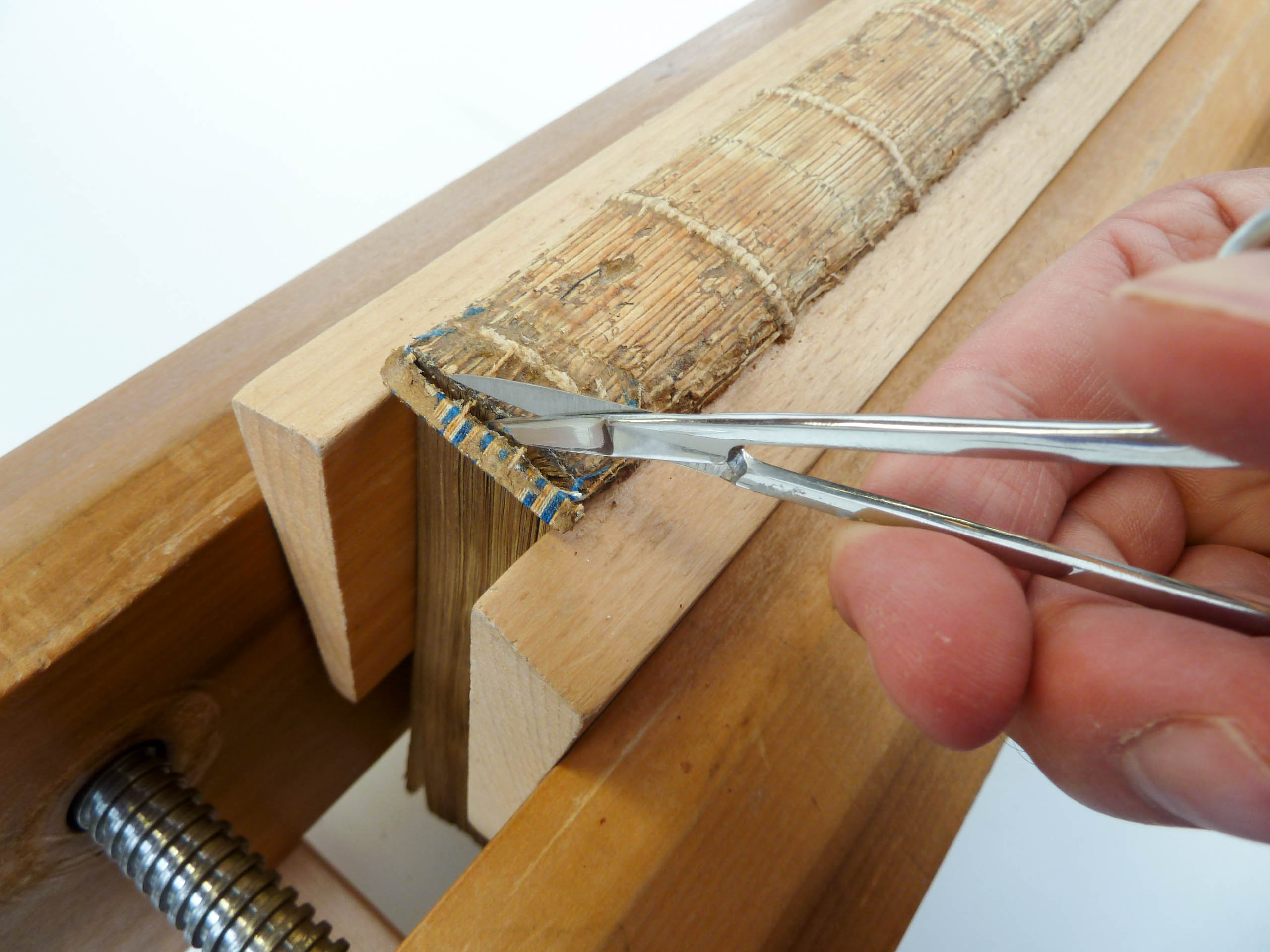 Homer removes a previous endband by cutting the tie down threads.

Judy Guston, Curator and Director of Collections of the Rosenbach, and Richard Homer, CCAHA Book Conservator, were involved in several discussions about the best direction for conservation and presentation of the Pentateuch. Referring to the velvet binding, Guston says, “We came to the decision to rebind the book because it was in a late 19th- or early 20th-century binding that was not appropriate for the book historically and which was damaged to the detriment of the safety of the book.” 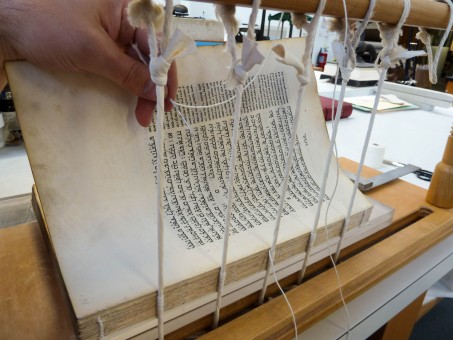 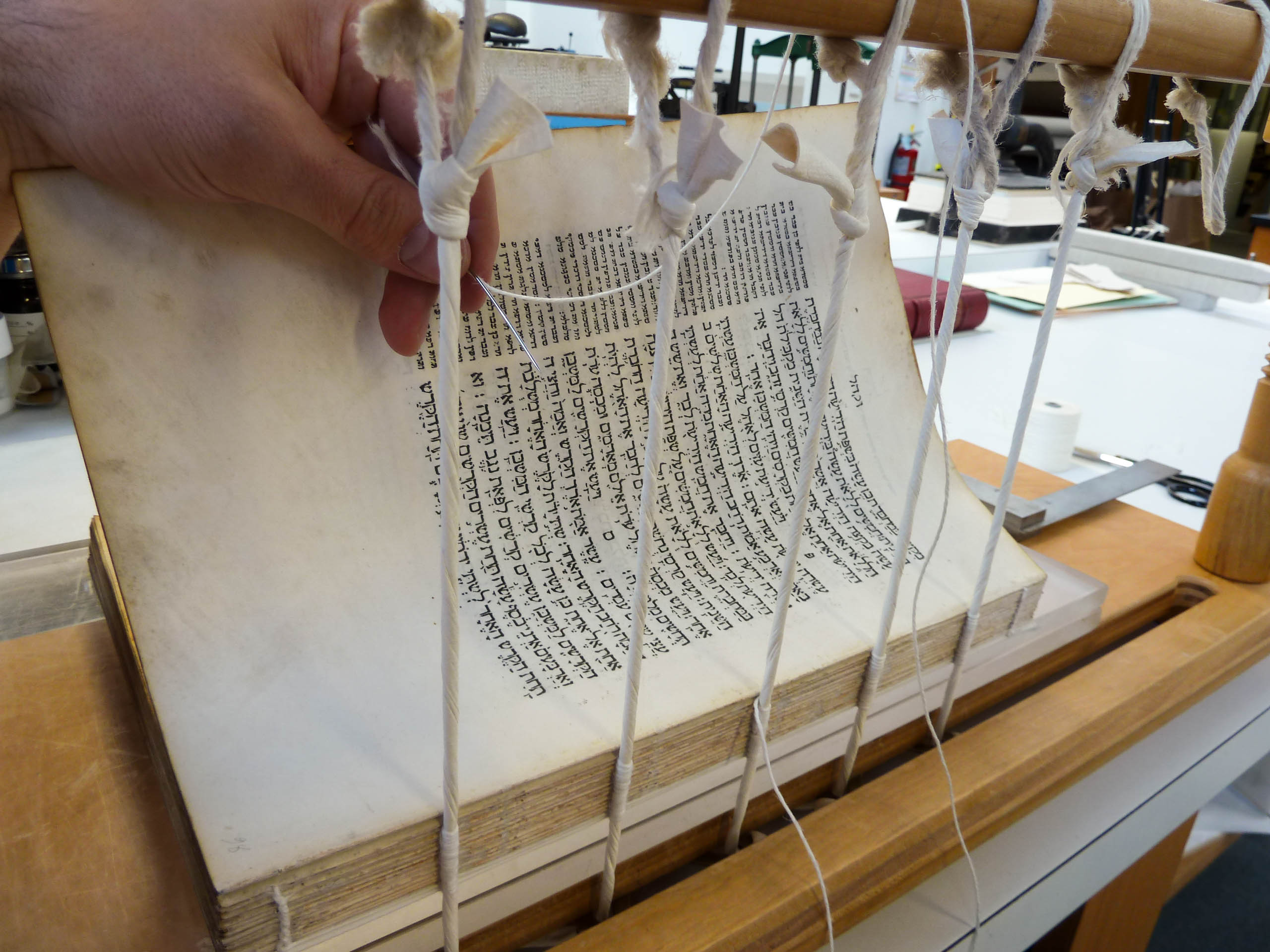 Guston asked that the book’s new binding be modeled on a late 15th-century, Northern Italian Hebrew book in the Library of Congress. “We aren’t aiming to fool anyone by approximating the appearance of a more accurate binding,” Guston says, “But as a teaching institution, we are trying to describe some of the physical attributes a book like this one may have had in its early life.” Guston and Homer selected a sewing structure and a brown calfskin leather that may approximate the volume’s original appearance. Additionally, Homer designed a decorative pattern for the front and back covers. Using various tools, he impressed the pattern onto the calfskin. This process of blind-tooling creates an impressed design by applying heated metal onto moistened leather. 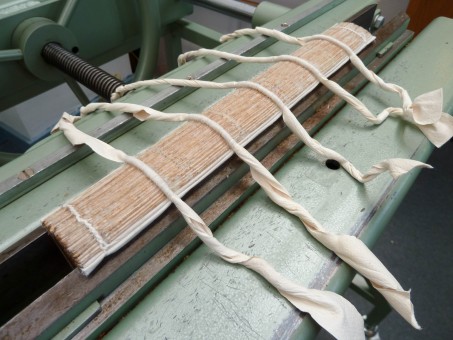 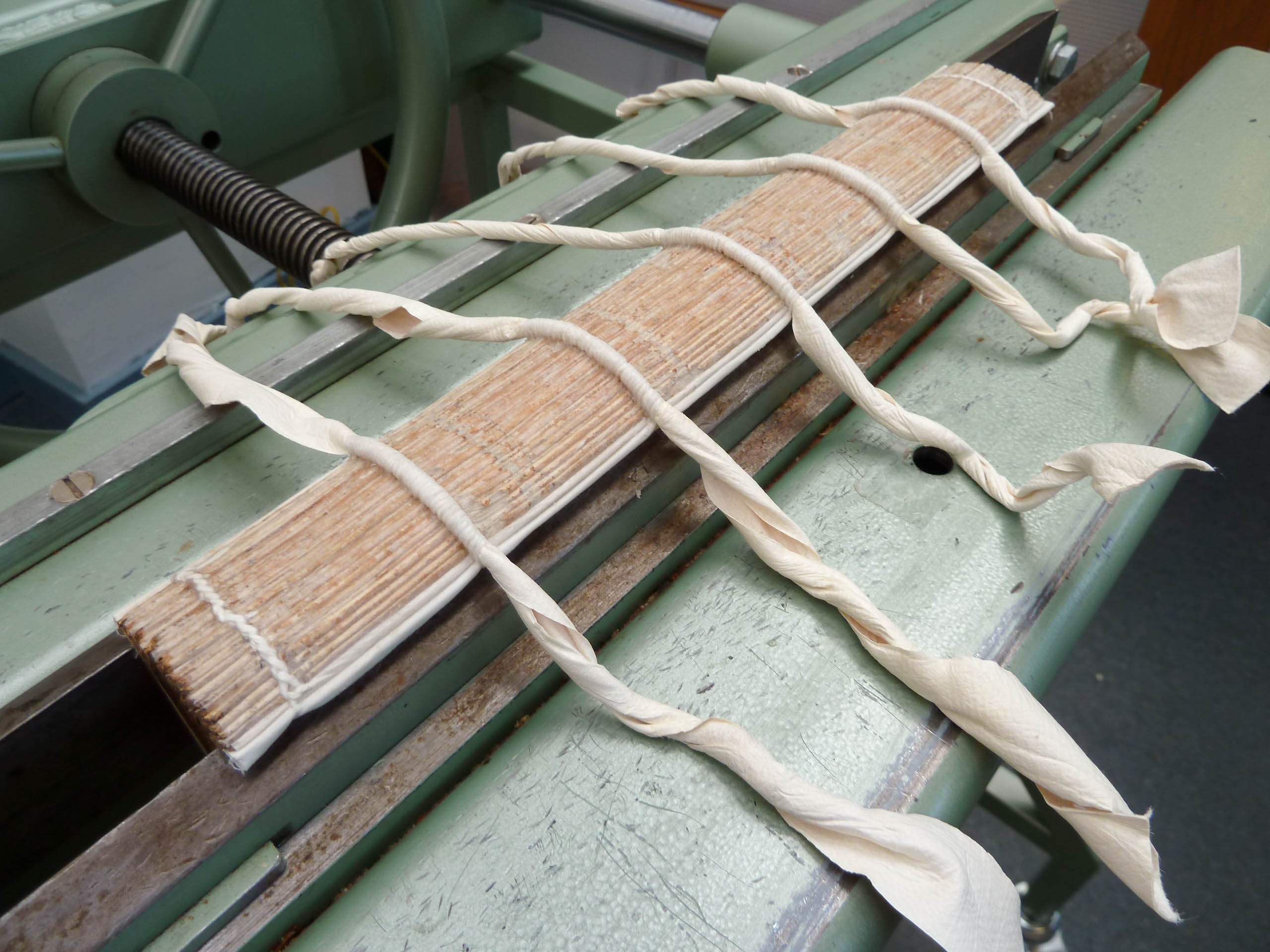 Homer consolidates the sections at the spine of the text block with wheat starch paste.

The resulting volume is stable enough to be exhibited and used for education. Guston says: “There are still many signs that show the various interventions the book has undergone over the centuries, so I am confident that future scholars will easily note what we have done even prior to reading our documentation.” 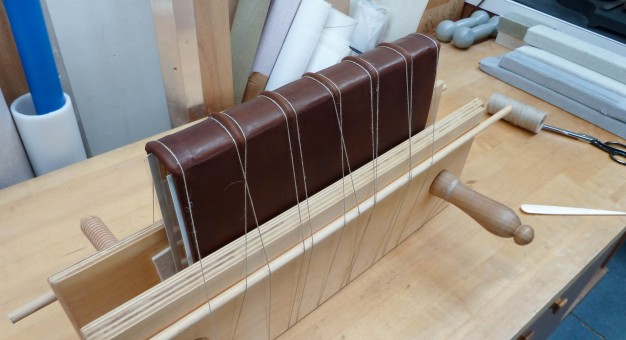 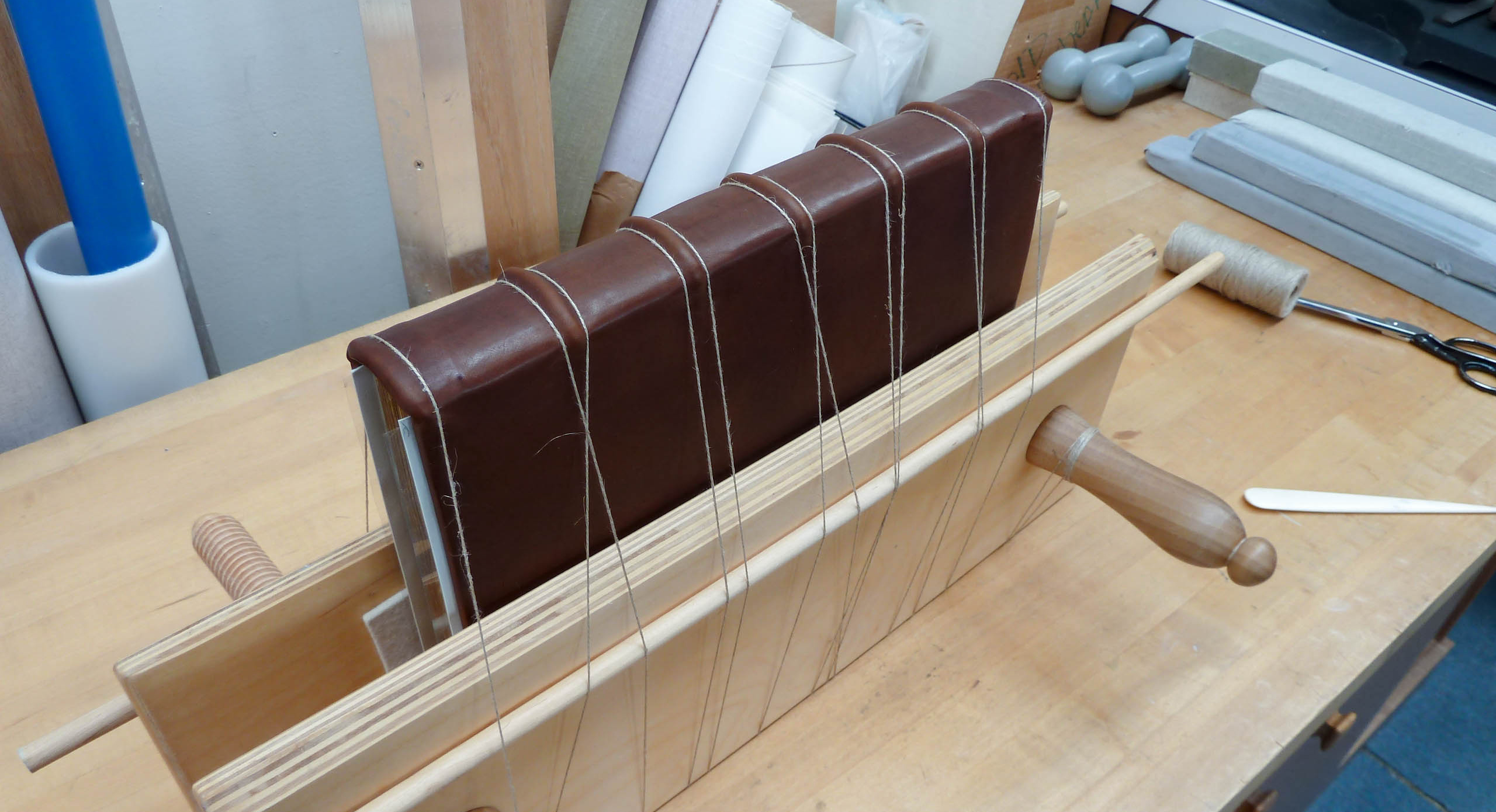 The spine is tied up after covering with new calfskin to secure the adhesion of the leather around the raised sewing supports.

Funding for the conservation and digitization of the Bologna Pentateuch was provided to the Rosenbach by the David Berg Foundation.