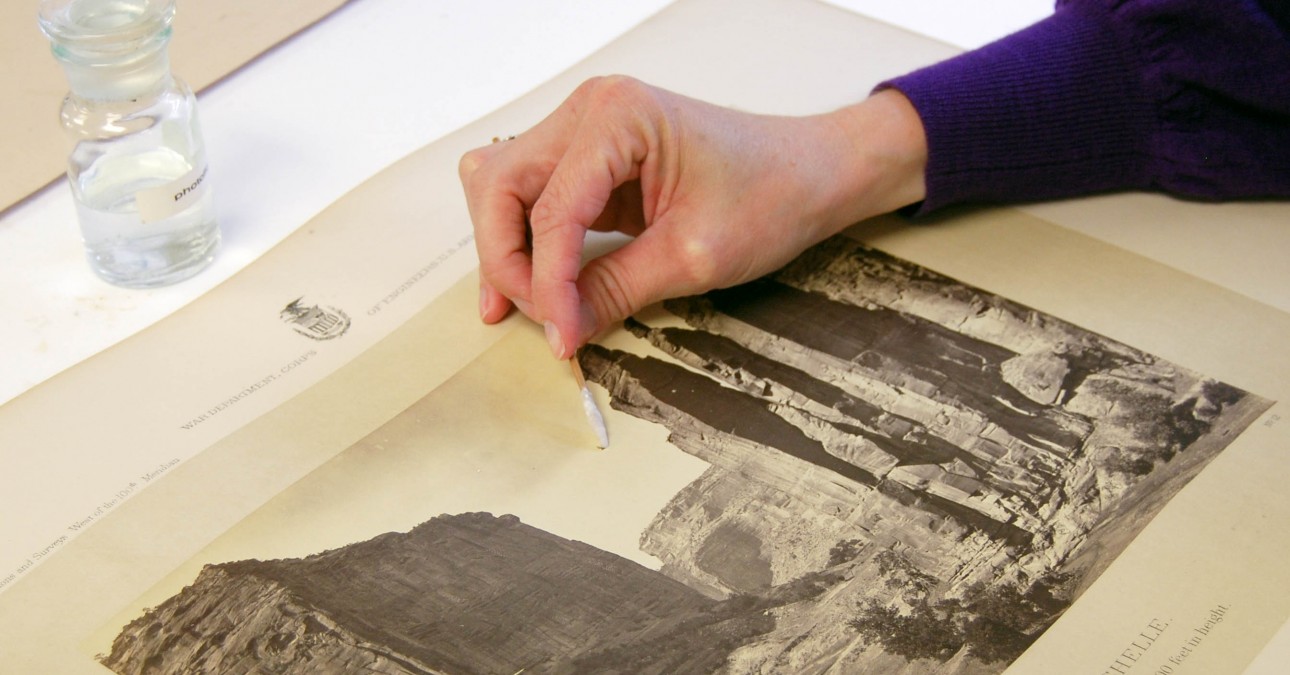 When photographer Timothy O’Sullivan (1840-1882) accompanied Lieutenant George Montague Wheeler on his “United States Geographical Surveys West of the One Hundredth Meridian” between 1871 and 1874, he crossed California, Nevada, Utah, Arizona, Idaho, and New Mexico with a portable darkroom, pulled by a mule. Wheeler’s goal was to create maps, collect data that would aid in the construction of roads and railways, and describe the area’s natural resources. But he also wanted to encourage settlement, and O’Sullivan’s photographs—printed from glass plate collodion negatives that, remarkably, survived their bumpy ride, as well as the dirt and extreme temperatures of the deserts and mountains—helped him do this. The images of beautiful views, ancient ruins, and members of Native American tribes were sold to the public and given to members of Congress. 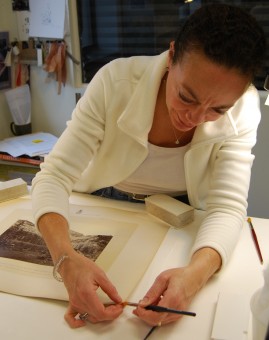 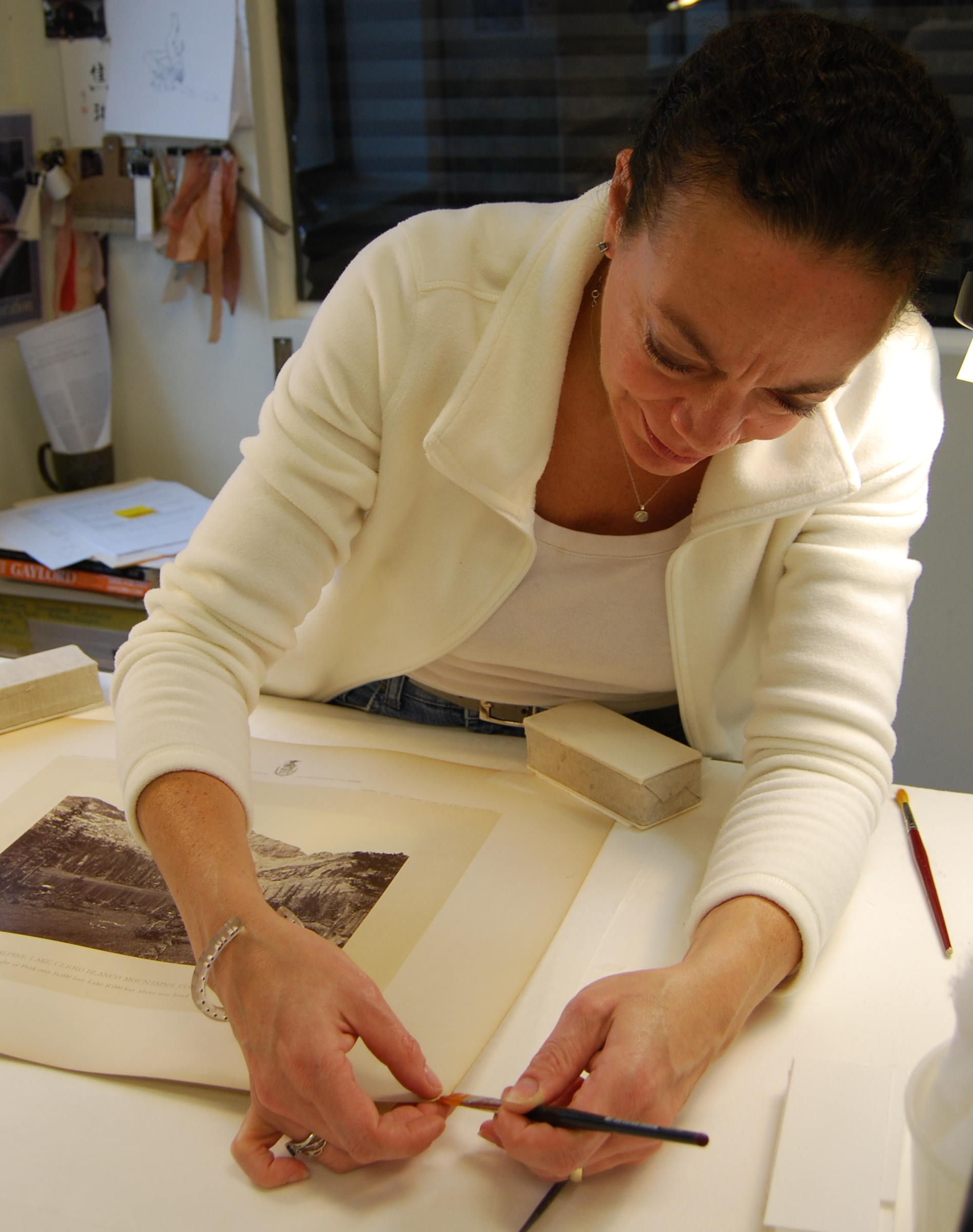 CCAHA recently treated 40 albumen photographs that O’Sullivan took during the 1871 field season and that belong to the U.S. Army Corps of Engineers’ Office of History in Arlington, VA. They were mounted to heavy-weight supports that had grown brittle and discolored, with creased and delaminating corners. Both the photographs and supports were soiled. Photograph Conservator Rachel Wetzel, Senior Conservation Assistant Jilliann Wilcox, and National Endowment for the Arts Fellow Marianne de Bovis surface cleaned the photographs and supports using white vinyl erasers. They reinforced the support corners, and they strengthened tears and weaknesses with mulberry paper and wheat starch paste. Manager of Digital Imaging Andrew Pinkham digitally captured the front side of each piece, and CCAHA’s Housing & Framing Department hinged each facsimile into individual window mats with covers. 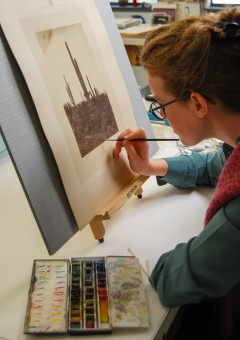 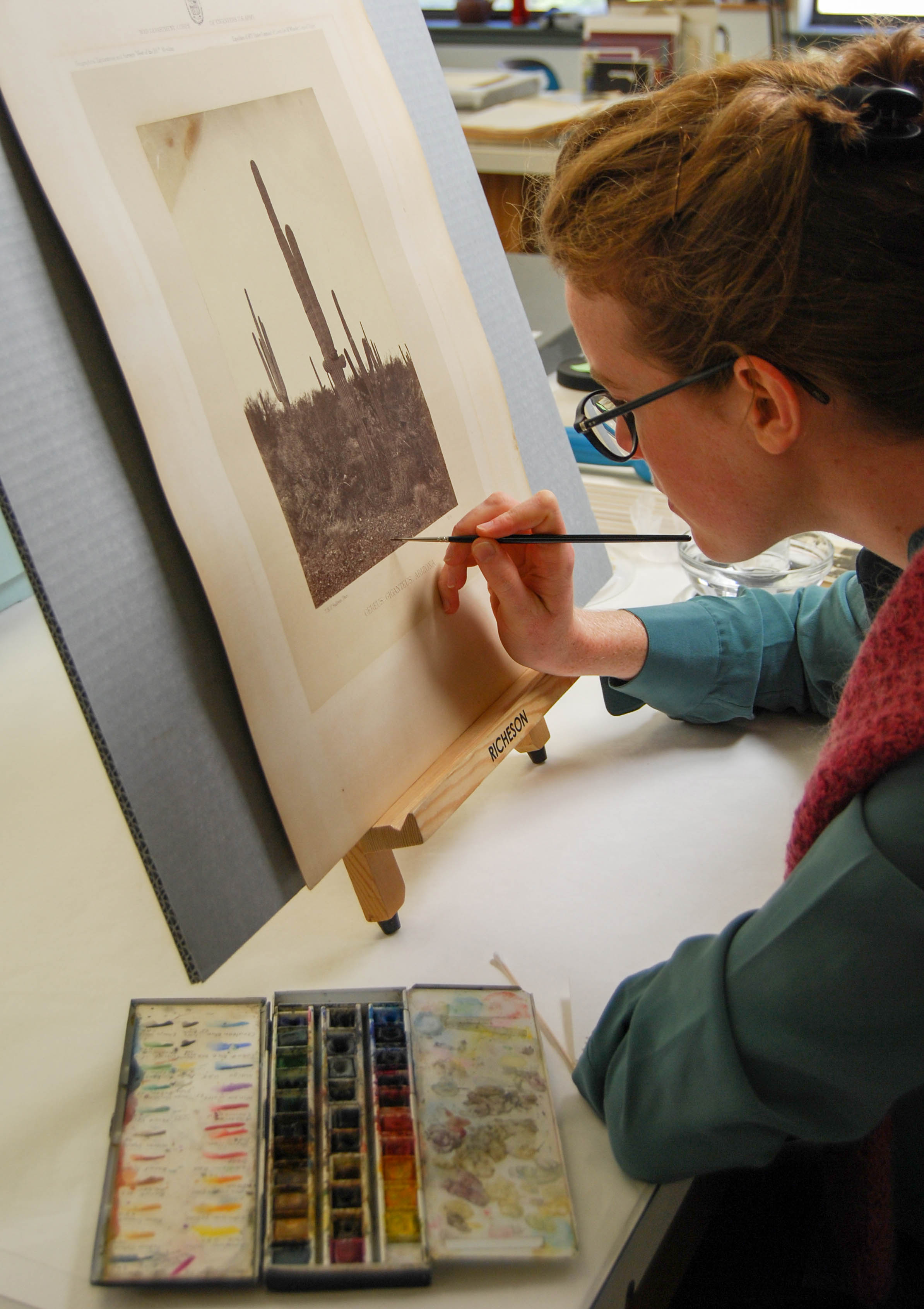 Inpainting a loss on a photograph

In addition to the albumen photographs, the Office of History brought in 55 stereoview cards that O’Sullivan produced during the survey. Popular in the late 1800s, stereographs consist of two two-dimensional photographs, slightly offset from one another, which—when viewed through a stereoscope—appear as a single three-dimensional image. Use and handling over the years left a coating of surface grime on these cards, and paper fragments were adhered to their surfaces. Conservation Assistant Heather Godlewski surface cleaned the cards and removed accretions. They were then placed in protective polyester sleeves.