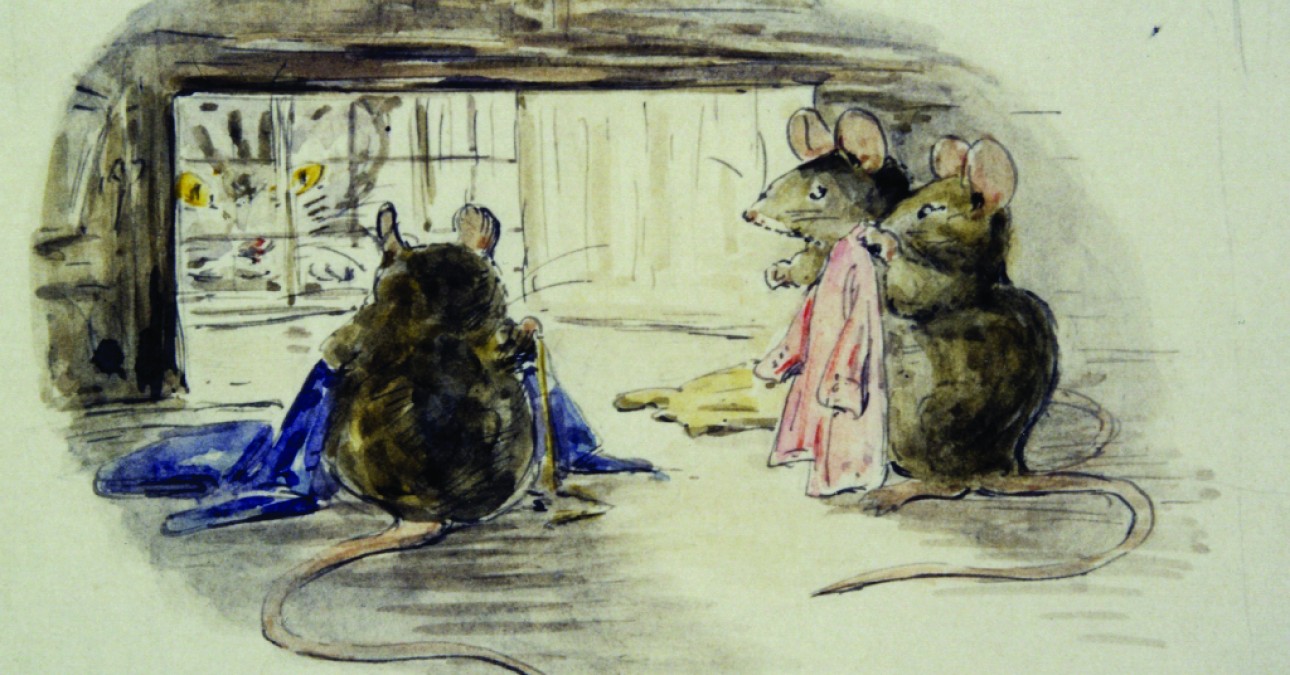 A Few of My Favorite Things

Ingrid E. Bogel retired as CCAHA’s Executive Director in September 2014. During her 23 years at CCAHA, Ingrid witnessed a veritable parade of our cultural legacy passing through the Center’s laboratory. Artifacts come to the Center from every region of the world, covering millennia of history—the timeless documents of people and events that changed the world.
For this issue of Art-i-facts, Ingrid selected five items that she found particularly inspiring. It is a deeply personal selection, reflecting her passions for pastels, architecture, nature, and so much more.

There was a time in 2006 when three intact copies of John James Audubon’s legendary The Birds of America were in the CCAHA laboratory for treatment. The enormous elephant folio prints were covering conservator’s desks throughout the Center, making it a true birders’ paradise. As a dedicated birder herself, Ingrid was in her element. At that time, CCAHA conservators were treating Audubon volumes from Lehigh University, the Maryland State Law Library, and the John James Audubon Center at Mill Grove.

But being surrounded by a profusion of Audubon prints wasn’t the only thrill for the birder in Ingrid. Over the years, she received opportunities to get to know some of the other great—albeit less heralded—scientific illustrators of the world’s birds. For instance, in 2013, CCAHA conservators treated the State Library of Pennsylvania’s nine-volume set of American Ornithology by Alexander Wilson, America’s first great artist of birds whose work was only surpassed by Audubon’s masterpiece.

And—even more special to Ingrid—there was the year when CCAHA memorably treated the work of John Gould, Australia’s “Father of Ornithology.” The Academy of Natural Sciences of Drexel University brought a copy of their very rare “suppressed” first edition of the first volume of Gould’s Birds of Australia to CCAHA for treatment. The work was performed in anticipation of a special exhibit, “John Gould and the Birds of Australia,” presented at the Australian Embassy in Washington, D.C., in partnership with the Academy. One of Ingrid’s favorite memories is attending the formal grand opening of the exhibit at the Australian Embassy, an international affair that celebrated a great naturalist and artist while graciously recognizing the conservation team who ensured its preservation. 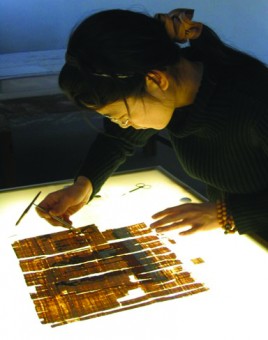 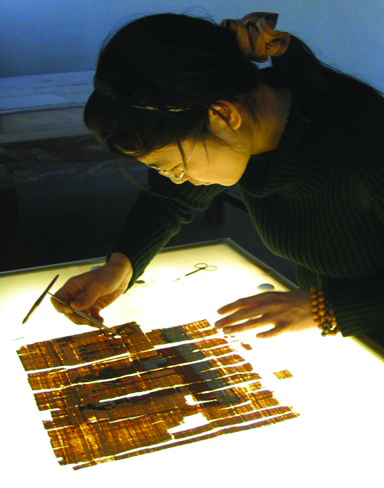 The First Book of Breathing was a fascinating treatment for the Center’s conservators. Dating back to the first century BCE, the papyrus was one of the oldest documents treated at the Center during Ingrid’s tenure. The treatment also reflected the flexible skills of CCAHA conservators in working with unusual materials such as papyrus. While conservators at CCAHA specialize in treating works on conventional paper, they are also prepared for the challenge of working with rarer materials such as papyrus, parchment, wallpaper, and early photographic media.

After spending the majority of its existence in a dark, sealed tomb in the dry desert of Thebes, the papyrus scroll was most likely in superb condition when removed in 1858. Exposure to sunlight, humidity, temperature fluctuations, and handling negatively affected the scroll, resulting in its degraded condition when it came to CCAHA in 2003. Not only had the papyrus become adhered to the glass frame, but it had suffered extensively from fragmentation, with numerous fragments dislodged and scattered within the frame. A photograph of Paper Conservator Soyeon Choi working with these fragments on a light table quickly became an iconic image of CCAHA.

The scope of the treatment extended beyond the walls of CCAHA, involving conservation scientists at the Philadelphia Museum of Art. While conservators at CCAHA worked to remove the papyrus from the original housing and stabilize it, conservation scientists at the Philadelphia Museum of Art analyzed the elemental makeup of the pigments using an electron microscope and energy dispersive spectrometer. Analysis revealed that the color palette of the scroll was different than had previously been assumed, resulting in the creation of an electronic facsimile of the scroll as it would have appeared thousands of years ago.

In 2006, Ingrid was visiting the exhibit “Whistler and His Circle in Venice” at the Corcoran Gallery of Art in Washington, D.C., when she noticed a very familiar pastel. This is the way it often works with CCAHA staff. For a brief period of time, a piece of artwork becomes the very center of our world. We come to know it intimately, doing all we can to ensure its long-term preservation. But our time with it is necessarily limited. The work is soon completed and we send it back to its home. Sometimes we never see it again. And sometimes we happen to turn a corner in a gallery and there it is, looking even finer than we remembered.

“Of all the works of art on paper that we treated at the Center, this one spoke to me the most,” said Ingrid. “It is exquisitely beautiful.”

This pastel by James Abbott McNeill Whistler is in the collection of the Westmoreland Museum of American Art in Greensburg, Pennsylvania. Barbara Jordan, Chief Curator, shares Ingrid’s enthusiasm for Whistler’s artistry: “We treasure it as part of our collection…I love the way that Whistler conveys the various colors and textures of the stucco walls, clouds, and shimmering light on the water’s surface using such spare marks on the paper. It’s a remarkable achievement.”

The Tailor of Gloucester by Beatrix Potter (Free Library of Philadelphia)

Shortly after the career-making success of her first children’s book, The Tale of Peter Rabbit, in 1901, Beatrix Potter composed a charming twist on a story she had heard while visiting the town of Gloucester several years earlier. Embellishing the story with a dozen watercolors, Potter presented the hand-written manuscript as a Christmas gift to Freda More, the ten-year-old daughter of Potter’s former governess.

Nearly a century later, the Free Library of Philadelphia brought that gift manuscript of The Tailor of Gloucester to CCAHA for treatment. Ingrid had just recently arrived at the Center, coming from her previous position at the Philadelphia Museum of Art Conservation Department. As a lover of children’s literature and watercolors, Ingrid immediately responded to the beauty and charm of the work. But most of all, she was moved by the opening inscription, a personal and tender note from Beatrix Potter to her young friend:

My dear Freda,
Because you are fond of fairy-tales, and have been ill, I have made you a story all for yourself—a new one that nobody has read before.
And the queerest thing about it is—that I heard it in Gloucestershire, and that is true—at least about the tailor, the waistcoat, and the
“No more twist!”
Christmas 1901 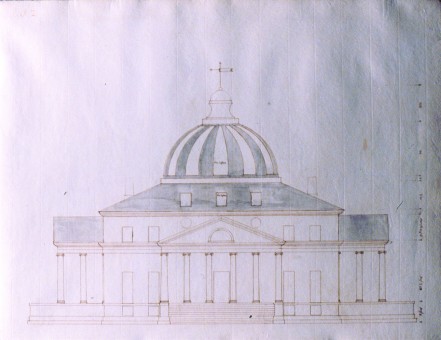 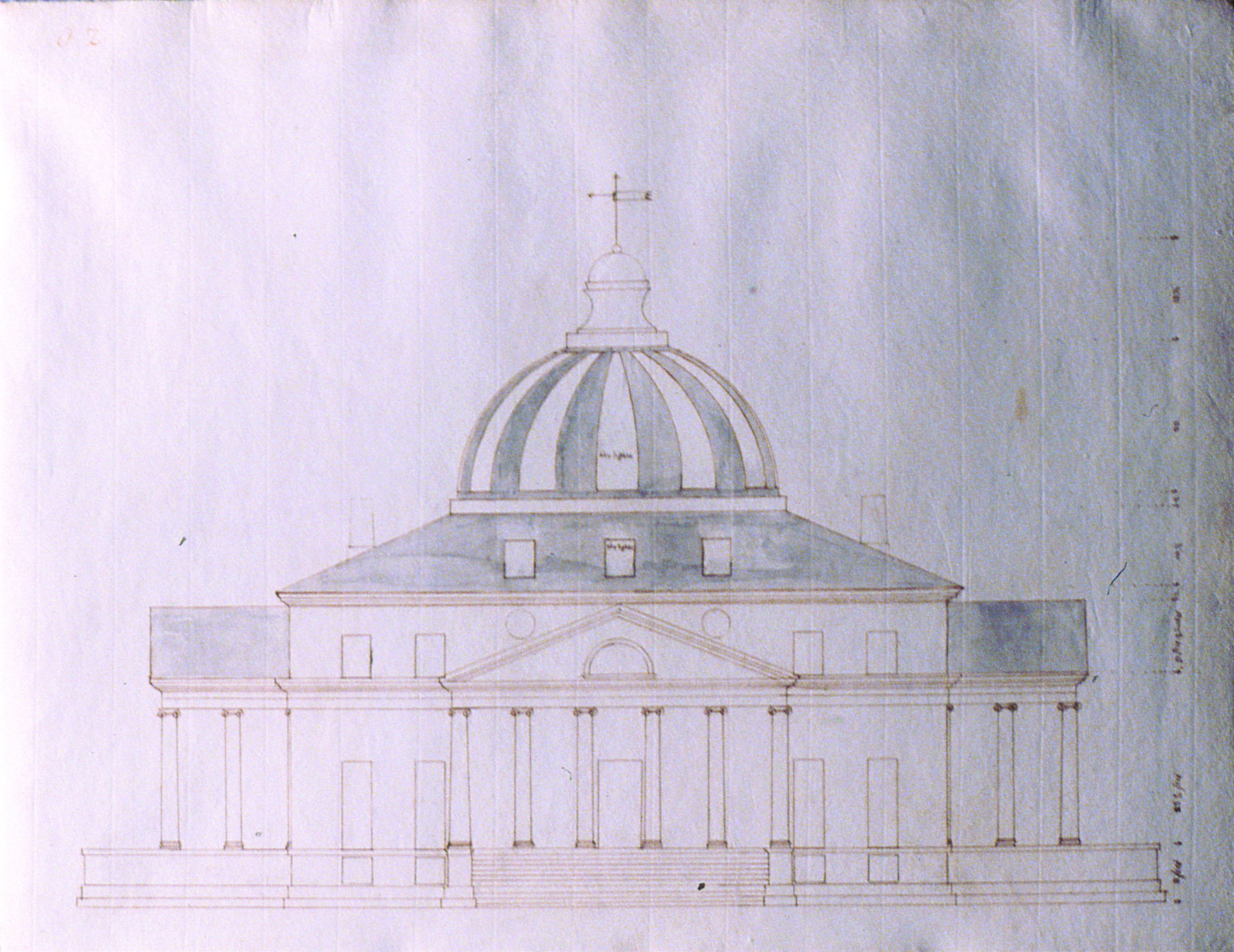 In 2001, the United States Capitol Competition Drawings came to the Center for treatment from the Maryland Historical Society. These architectural drawings were entries in the open competition to design the U.S. Capitol in 1792, including an anonymous submission drafted by Thomas Jefferson, then Secretary of State. For Ingrid, the arrival of these drawings at the Center helped reignite a personal fascination with architecture.

“Architecture was always an interest of mine, but I never received an opportunity to study it at school,” said Ingrid. “Being at the Center, with conservators skilled at treating architectural documents, renewed and deepened my interest.”

Over the years, the Center’s staff have treated important collections of architectural records, representing major architects including Louis Kahn, Robert Venturi, and Frank Lloyd Wright. Ingrid herself was able to further explore her interest in architecture as a part of her professional development, attending a ten day workshop in Chicago hosted by the Society of Architectural Historians. Architectural records have continued to be the focus of national conferences hosted by the Center, starting with a major conference in Philadelphia in 2000, followed by a conference in Chicago in 2007, and most recently in Buffalo in 2014.